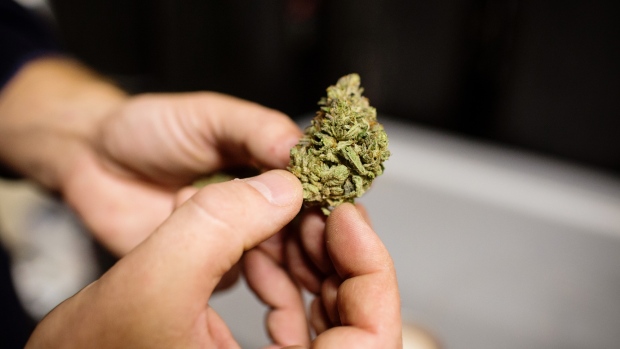 A grower inspects a cannabis bud at a craft grow operation outside of Nelson, British Columbia, Canada, on Thursday, Nov. 8, 2018. , Bloomberg

A pot-focused asset manager run by the chairman of Curaleaf Holdings Inc. (CURA.CD) is launching a new hedge fund with an eye to going long on U.S. cannabis companies and shorting Canadian producers.

Measure 8 Venture Partners LP is aiming to raise US$100 million for the hedge fund, which will go live on June 1, and is also in the midst of raising US$200 million for a new venture fund.

“I have a lot of respect for the Canadian LPs but I don’t want to be long them right now,” Justin Ort, a Measure 8 partner, said in an interview at Bloomberg’s Toronto office. “It’s almost like they have one hand tied behind their back” because of the country’s stringent marketing restrictions.

The New York-based firm was founded by Boris Jordan, best known for his role in privatizing Russian state assets after the fall of communism in the 1990s. He’s the chairman and largest shareholder of Curaleaf, the biggest U.S. cannabis company by market value, and chief investment officer of Measure 8’s existing venture fund.

Measure 8 generated some controversy last week with Curaleaf’s US$950 million acquisition of the Select cannabis oil business from Cura Partners Inc. Measure 8 owned about 12 per cent of Cura Partners through its existing venture fund and made a “multiple bagger” return on the sale, according to Ort.

The stake was disclosed by Wakefield, Massachusetts-based Curaleaf, which said non-conflicted board members recommended the deal and it received an independent fairness opinion from Beacon Securities.

Measure 8 plans to close its existing venture fund soon, as it turns its attention to the hedge fund and the new venture fund, which it aims to launch before the end of 2019, said marketing director Kevin Gahwyler. The existing fund returned 514 per cent in the 12 months to April and had a net asset value of US$241 million before the Cura Partners deal, according to the firm’s marketing material.

The hedge fund will employ a combination of strategies including short-term trading, risk arbitrage and investments in private companies, said Ort, who will be the fund’s chief investment officer. Thematically, Ort intends to short Canadian cannabis producers while going long companies with U.S. exposure. Under a short sale, investors bet that the price of a stock will go down. A long bet is the opposite.

Ort and Jordan believe Canada’s licensed producers, known as LPS, are overvalued, while the U.S. is a much larger market and more adept at creating consumer brands. One recent short trade was Vaughan, Ontario-based CannTrust Holdings Inc. (TRST.TO), which fell 25 per cent over six trading days after offering 37 million shares at a discount to its share price last month.

It’s not easy to short cannabis stocks, as many have a small public float and aren’t readily available to borrow. This results in average borrowing fees of about 15 per cent compared with typical rates closer to 1 per cent, according to Bloomberg Intelligence.

“You have to be very nimble, you have to be very good at sourcing borrowers, you have to have a real edge when you’re putting something on because the bar to be right is very high,” said Ort, who joined Measure 8 from FNY Investment Advisers, where he was a senior partner and ran one of the risk arbitrage teams.

Risk arbitrage, which aims to profit from the spread between a takeover target’s stock price and the offer price before a deal closes, is a rare strategy in the cannabis investing world and Ort hopes to take advantage of that.

“Cannabis funds typically don’t have someone on hand that knows how to play the risk arb space, so we think there’s a little bit of a window there to make very outsized returns,” he said. “That’s our edge: we feel like we really have deep insights into these companies and we get in there ahead of the market’s wider understanding of them and then we try to exploit that.”