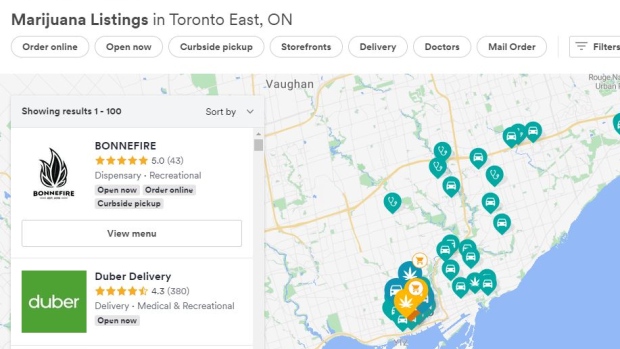 Several prominent Canadian cannabis retailers are asking the Royal Canadian Mounted Police to take a hard look into Weedmaps to stamp out illicit marijuana operators on the popular online platform.

The letter, co-signed by the heads of eight cannabis retailers including High Tide Inc. and Superette Inc., said that more work needs to be done to shut down the proliferation of illicit cannabis dispensaries and delivery services across Canada. The signatories focused their attention on Weedmaps, a website that operates as a platform for both legal and illicit dispensaries and delivery services in the letter delivered on Monday to RCMP Commissioner Brenda Lucki and Deputy Commissioner Michael Duheme.

"In view of Weedmaps’ unwillingness to delist illicit market services in Canada and to stop profiting from the proceeds of crimes committed in Canada, we ask that you direct your appropriate investigative units to immediately look into what enforcement action can be taken against Weedmaps’ Canadian operations," the letter states.

A Weedmaps spokesperson ​told BNN Bloomberg in an email that that transitioning to regulated cannabis markets is "inherently complex" and providing accurate information is "crucial," but didn't directly address some of the concerns raised by retailers in the letter.

"Safe and convenient access to cannabis for patients and consumers is essential for a functioning and thriving legal cannabis economy, and Weedmaps is committed to working with the federal and provincial governments to ensure this is prioritized," the spokesperson said.

Weedmaps features thousands of illicit cannabis providers across Canada on its website as well as some of Canada's legal pot shops but doesn't designate any difference between the two, creating customer confusion, according to the letter.

As retailers and producers that wish to take part in Canada's recreational cannabis industry need to spend thousands of dollars to obtain the proper licences needed to sell pot in the country, illicit competitors on Weedmaps can simply operate relatively unfettered and aren't beholden to the same strict regulations as their legal peers.

That's something that frustrates Mimi Lam, chief executive officer of Superette, which owns several pot stores in Ottawa and Toronto. Lam has spent the past several years working within the legal market to open her stores and is upset that Weedmaps lumped her business in the same group as illicit market operators.

"We've had to compete with a very strong illicit market since day one," Lam told BNN Bloomberg in a phone interview. "Being lumped in the same group as the illicit market is not beneficial for any legal operator."

Ghost Management Group LLC, which owns Weedmaps, announced plans last year to pull unlicensed California-based marijuana businesses from advertising on its site. However, illicit operators in Canada appear to continue advertising on the platform without any repercussions.

"A quick Weedmaps search is a very easy way to see what's out there, and it's clear that law enforcement here in Canada has a long way to go," Lam said.