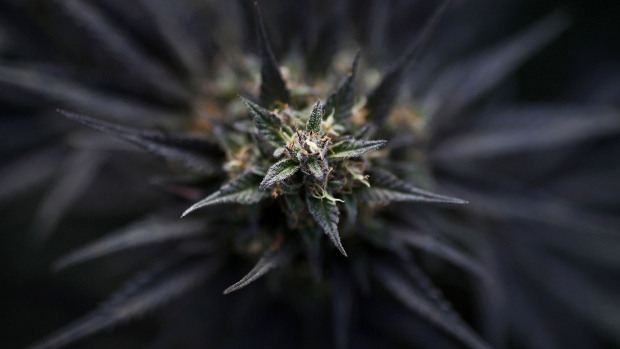 The bud of a cannabis plant is seen on plant inside the KannaSwiss GmbH greenhouse facility near Kerzers, Switzerland, on Thursday, Oct. 19, 2017. KannaSwiss, a company founded in 2014, is already producing marijuana that meets Switzerland’s legal standard containing no more than 1% Tetrahydrocannabinol—known as THC, the psychoactive chemical that gets you high. Photographer: Stefan Wermuth/Bloomberg , Photographer: Stefan Wermuth/Bloomberg

(Bloomberg) -- In a sign that Europe’s cannabis market is gaining traction, the Frankfurt-based operator of a website that pairs patients with marijuana-prescribing doctors has closed a seed funding round while adding one of the industry’s biggest-name executives to its board.

The Bloomwell Group, a holding company for the marijuana telemedicine platform Algea Care, obtained more than $10 million in what Chief Executive Officer Niklas Kouparanis said in a phone interview is “the biggest seed round ever closed in Europe so far for a cannabis company.”

Bloomwell has secured the backing of Boris Jordan, chairman of U.S. multistate operator Curaleaf Holdings, who will join its board. The round was led by Jordan’s fund, Measure 8 Venture Partners, and values the company at $50 million to $100 million, according to a company spokeswoman.

It’s the latest sign that European cannabis companies are taking off. Around 1.2 billion euros ($1.39 billion) has been raised to date in both private and public investments, with more than 20% of that coming in the first six months of 2021, according to a recent report. Germany in particular is doing well. Since legalizing medical marijuana in 2017, its market has become the largest in Europe, selling $206 million in high-THC products to patients in 2020, according to New Frontier Data, a cannabis research firm.

Still, there’s room for growth. Only 0.1% of Germany’s population have registered as cannabis patients, compared to a much-higher saturation rate in other countries where medical cannabis is legal. Comparable rates are 1.25% in the U.S., 0.99% in Israel and 0.82% in Canada, New Frontier Data found.

While Algea Care has around 60 doctors that prescribe medical cannabis on its platform, there are still stumbling blocks. One issue is that many doctors don’t know which cannabinoids are best for certain ailments, Kouparanis said. Algea’s platform currently has around 4,000 to 5,000 patients, and as it gathers data on their treatments the company will improve doctors’ understanding, he said.

Another problem is that German marijuana prices are too high, Kouparanis told me. His company currently gets its cannabis from the Netherlands, but it’s interested in shifting to marijuana cultivated in Portugal, where growing costs are cheaper.

Bloomwell is focused on Germany’s medical market, but eventually intends to expand outside of the country. There’s also the prospect of legal recreational use in Germany, which Kouparanis said he sees happening in three to four years.

“That would be huge,” he said, noting that the country’s population of around 80 million people exceeds the populations of the two biggest legal markets for cannabis so far: California and Canada. “We want to be a European company, not a German company only.”

“I think some of the strong brands across the U.S. have been forgotten with a focus on building distribution,” Canopy Growth Corp. Chief Executive Officer David Klein said in a phone interview about the company’s deal to buy Wana Brands.