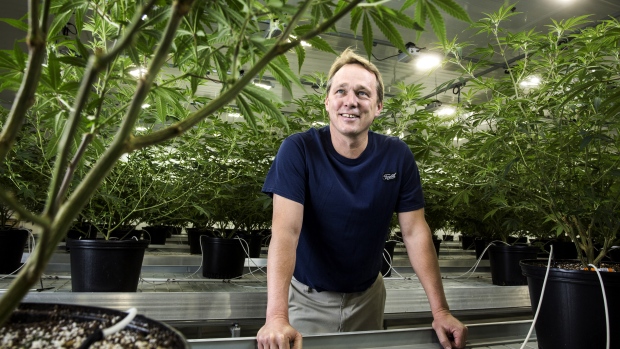 Canopy Growth Corp. is considering multiple ways to leverage its assets, including issuing bonds, mortgaging its properties or even spinning them off into a real estate investment trust, according to the pot company’s chief executive officer.

“I do not wish to continue to be complemented on the extraordinarily clean balance sheet I have,” Bruce Linton said in a phone interview Friday. “It is not an efficient use of assets.”

Linton estimated that Canopy has “more than a couple billion dollars” of tangible assets and very little debt on its balance sheet. The company’s financial statements for the quarter ended Dec. 31 show $960 million worth of property, plant and equipment. By contrast, its has $773 million in long-term debt, including the $600 million it raised in a convertible bond sale last June.

Cannabis companies have only recently started tapping the debt markets, and none of them have issued a straight bond.

Canopy, the largest pot company by market value, is exploring how best to monetize its tangible assets, which include over 4.3 million square feet of production capacity at 10 licensed sites, he said. “It could be anything from a bond to a mortgage to a REIT,” he said.

“I’d like to use that money to build in five more countries rather than look at it and go, ‘Yep, that’s all ours, we own it,”’ Linton said.

Other industries have spun off their real estate into separate publicly traded REITs, but this would be a first in the cannabis industry. Grocery retailer Loblaw Cos. in 2013 formed Choice Properties REIT with approximately $7 billion worth of real estate, and Canadian Tire Corp. followed suit in the same year, creating CT REIT.