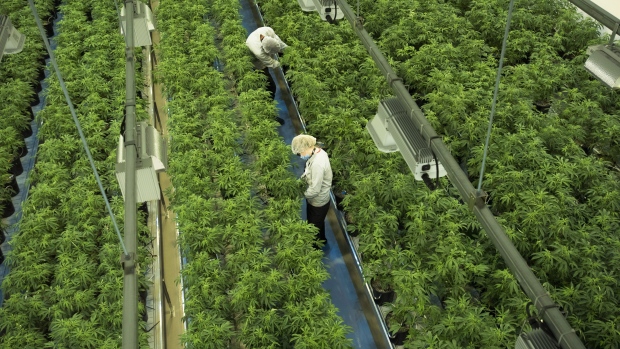 Staff work in a marijuana grow room that can be viewed by at the new visitors centre at Canopy Growth facility in Smiths Falls, Ontario on Thursday, Aug. 23, 2018. , THE CANADIAN PRESS/Sean Kilpatrick

The Smiths Falls, Ont.-based cannabis company said four drinks from its Quatreau brand will be available online to U.S. customers Tuesday. They will contain 20 milligrams of CBD, come in ginger and lime, cucumber and mint, blueberry and acai, and passion fruit and guava flavours and be Canopy's first CBD drinks to cross the border.

The beverages, which have been available in Canada since last fall, will join Martha Stewart, BioSteel and This Works CBD products Canopy already sells in the U.S. as part of an expansion strategy.

“When we look at opportunities on a global basis, Canadians and Americans have a lot of the same consumer insights â€¦ but there's no doubt that the United States is a larger population, and therefore a larger business opportunity,” said Rade Kovacevic, Canopy's president and chief product officer.

Industry observers believe those U.S. opportunities will multiply this year because U.S. President Joe Biden and his Democratic party have favoured legislation to relax cannabis laws.

Biden supports decriminalizing pot, expunging criminal records related to its possession and the Safe Banking Act, a Democratic bill that would allow financial institutions to work with cannabis companies without retribution.

Ahead of his inauguration, the U.S. House of Representatives paved the way for federal cannabis legalization by voting in favour of taking the substance off the dangerous drugs list, but Senate and White House approvals are needed for the policy to be implemented. Some believe those approvals could come this year.

Canopy is preparing for that day by pushing into the market first with CBD, a compound found in cannabis and hemp that doesn't produce a high but is believed to relax consumers.

CBD regulations vary across states, but several have approved its recreational use and many more have OK'd it on a medical basis.

Meanwhile, consumer demand for CBD is growing. New Frontier Data and Square predict US$121 billion will be spent on CBD across the country between 2020 and 2025, with consumers between the ages of 34 and 44 fuelling much of the boom.

Canopy's research also revealed that while most Americans have heard of CBD, two out of every three can't name more than one brand producing it.

“Market share is highly fragmented and so for us, this plays very much to our strengths of having a proven brand with a proven formulation that we know how to scale for a large number of consumers,” Kovacevic said.

When choosing to introduce Quatreau to the U.S., Canopy first turned to consumer insights to discover what Canada's neighbours like, he said.

“Someone in Rochester, N.Y. is more likely to have similar taste profiles to someone in Toronto, than someone in Dallas, Texas, for example,” he said.

Once Canopy identified tastes and overlaps between its Quatreau products, it took on production, logistics, supply chain, distribution and marketing.

The Quatreau sparkling waters will be sold through e-commerce - a model that can be built on if the U.S. cannabis market flourishes, Kovacevic said.

“That way as the opportunity in the United States continues to open up and scale, we're going to be positioned to be able to consolidate consumers interest in our products and brands and continue to drive them forward.”