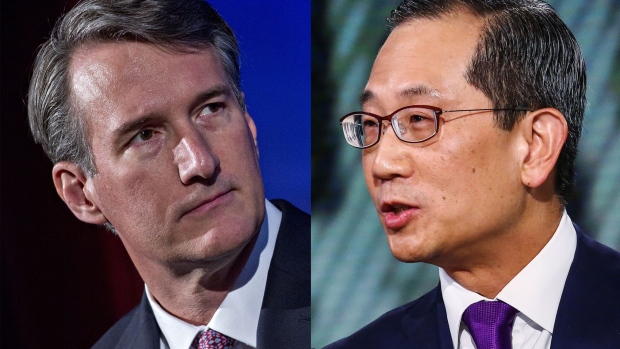 (Bloomberg) -- Carlyle Group’s co-leaders were meant to be complementary: a swaggering dealmaker and an operations guru who would carry the torch for its founders. But inside the firm, Kewsong Lee started small talk with a jab to Glenn Youngkin. “How’s the infrastructure group?” Lee asked in front of others. That was Youngkin’s domain -- and it wasn’t going well.

One of the private equity industry’s boldest attempts at succession planning unraveled with Youngkin’s abrupt announcement on Tuesday that he’s stepping down to focus on public service.

Yet for many inside the $217 billion alternative asset manager, the breakup was anything but a surprise. After 2 1/2 years of awkward, and increasingly acrimonious parrying as co-chief executive officers, Lee is gaining sole control. Some predict Youngkin -- whose departing memo to staff said he doesn’t know what he’ll do next -- will try politics instead, running for governor of Virginia.

Current and former executives, clients and others close to the firm described the drama on the condition they not be named because of concern it could affect their work or dealings with Carlyle. The frictions -- spilling out of a murky division of power -- played out in Lee taking control of key growth initiatives while Youngkin ran units that stalled. It offers a cautionary tale for an industry in which pioneering founders, most of them billionaires, are trying to install a new generation of leaders.

A spokeswoman for Carlyle declined to comment beyond the co-CEOs’ public statements.

As Carlyle’s founders began preparing years ago to step away from the firm, they decided they wanted to create a team, much like they had been, at the very top. They settled on a concept of two co-CEOs, each with different strengths, who would work together.

On paper, Youngkin and Lee seemed like a good match. Both were alumni of Harvard Business School and McKinsey & Co. Youngkin, 53, joined Carlyle in his 20s and was known as the nice guy and culture carrier. He played an instrumental role in the firm’s expansion to Europe and led back-office efforts for its initial public offering in 2012. Among the founders, David Rubenstein was Youngkin’s most avid backer.

Lee, 54, was the shrewd negotiator who came on board mid-career. He earned respect for cleaning up messes, getting Carlyle out of disastrous hedge fund bets and rebuilding a credit group once marred by missteps. He was favored by founder Bill Conway, who was more focused on prowess in investing and negotiation. Before the co-CEOs ascended at the start of 2018, Lee sought better terms for the both of them.

In a joint interview in 2018, Lee and Youngkin emphasized their symbiosis, noting they agreed on strategy and had decided who would run what. “We see eye to eye on almost every major priority of the firm,” Lee said at the time. “In fact, the organization has no idea we’re synced up as well as we are.”

But as they put their mark on Carlyle, Lee became more dominant. He commanded the firm’s strongest businesses, including corporate private equity, and he had no qualms about consolidating or trimming units he thought the company was better off without. The firm, for example, spun out its Asia real estate group. Lee also pushed to cut pay for veteran fundraisers who were largely tending to investors already loyal to Carlyle.More recently, Lee has privately discussed getting out of European real estate, investment solutions and infrastructure -- businesses under Youngkin. The firm raised $2.2 billion last year for its global infrastructure fund and is pursuing projects including the redevelopment of Terminal One at New York City’s John F. Kennedy International Airport. The Covid-19 pandemic complicated that deal, spurring some disagreement among the co-CEOs about how to best advance it.

Carlyle by many measures is doing well. It has ample cash to deploy and has told shareholders it expects to find investment opportunities in the current economic turmoil. Analysts estimate the company returned to profit in the second quarter after taking hits when the virus broke out early this year. It’s set to report results next week.

Yet Youngkin’s exit has been brewing for some time. Before rising to CEO, he had explored a jump to politics, spending months meeting with Virginia business leaders and political advisers. More recently, as relations with Lee grew strained, Youngkin confided in colleagues he might step down at the end of this year. Ultimately, he didn’t wait.

Some Carlyle insiders suggest that a nonprofit he founded with his wife in June, focused on helping unemployed Virginians return to work, is a step toward picking up his old political aspirations and running for office.

“The top question that I have been asked,” Youngkin wrote to colleagues about his departure, “is ‘what are you going to do?’ ... and the honest answer is, ‘I don’t know.’ What I do know is that I have long felt a calling to service and Covid’s massive disruptions and intense social and economic challenges have only strengthened that conviction.”

Lee thanked Youngkin in Tuesday’s announcement for his 25 years of service to Carlyle, saying he was “especially grateful for his friendship and partnership as co-CEO.”

But in the end, Lee and Youngkin never struck the balance that the firm’s three founders showcased for decades. Notably, that trio had more clearly delineated roles -- with Rubenstein raising money, Conway focusing on deals and Daniel D’Aniello ensuring operations ran smoothly. It proved hard to duplicate.

Now Lee will have to lead the firm through the economic carnage unleashed by the pandemic, an environment threatening existing investments but also presenting new ones, especially for the growing credit group. Some large investors say they like his decisiveness and that the firm can fare well under a single leader. Its performance going forward will rest squarely on his shoulders.

Lee will still have to share the limelight with Rubenstein, who remains Carlyle’s most prominent figure. Rubenstein has continued to take speaking engagements in recent years and has a show on Bloomberg Television. But within Carlyle’s new Washington D.C. office building, he was given a corner suite near the lobby with co-founder D’Aniello, far from the inner workings of the company they built.

With Youngkin’s exit, Carlyle’s founders briefly considered picking another co-CEO, according to people with knowledge of those discussions. Ultimately, they decided Lee should run the firm alone.