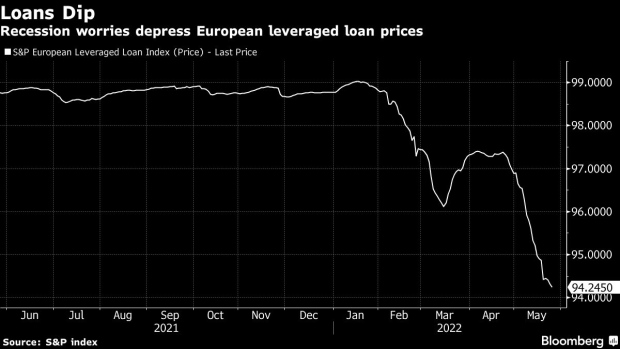 The 337.7 million euro ($360.7 million) deal is crafted as a so-called “print and sprint,” according to people familiar with the matter, who aren’t authorized to speak publicly. It’s a kind of transaction that involves CLO managers purchasing leveraged loans in the secondary market, rather than taking the normal route of opening a credit facility and slowly building up a portfolio.

JPMorgan Chase & Co. is arranging the CLO sale, which is structured with a reinvestment period of four-and-a-half years and a non-call period of one-and-a-half years. Representatives for Carlyle and JPMorgan declined to comment.

Print and sprint deals usually occur when leveraged loan prices weaken sharply. The S&P European Leveraged Loan index has tumbled in recent weeks and is now at the lowest since August 2020.

Index prices have fallen more than 3 cents from April and were at 94.25 cents on the dollar on Wednesday.

Ares Management Corp. is also preparing a “print and sprint” deal, but in the US. The company is marketing a roughly $400 million CLO, and Citigroup is arranging the sale.