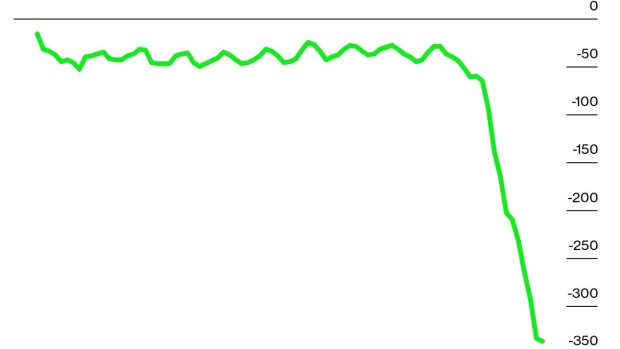 Right now in the U.S., gasoline is as cheap as it’s been since 1999. The difference in price for a barrel of oil before and after refining—known in industry parlance as the “crack spread”—was more than $20 earlier this year. Now it’s negative.

But even gasoline that costs less than a fistful of gum hasn’t been able to stimulate demand. That’s “probably down more than 30%,” according to one refining CEO, and my BloombergNEF colleagues estimate that U.S. gasoline consumption could fall more than 60% this year.

Gasoline demand is the sharp end of our newfound not-driving habit, but there are many other ways in which Covid-19 has asserted itself on our transportation habits. One example: traffic data provider Inrix estimates that U.S. national traffic volumes started to fall on March 13, and were down 30% from normal levels by March 20.

Another example: Uber downloads have cratered in this month, according to mobile app data company SensorTower. On Jan. 1, Uber was number 16 in iPhone downloads; on March 24, it ranked 318.

Yet another example: Urban transport app Citymapper’s Mobility Index tracks the percentage of a city moving compared to normal levels. On March 23, Milan was at all of 4% of its usual, while St. Petersburg was at 73%. New York City was at 8% of its normal levels, compared to 67% two weeks prior.

So traffic is down basically everywhere. But one type of moving around is skyrocketing: cycling. The Bicycle Coalition of Greater Philadelphia has compiled data from automated bicycle counters on trails in the Delaware Valley region, and some are showing remarkable increases in traffic. On the largest trail, traffic has nearly doubled year-over-year—other trails have almost quintupled.

Thanks to all this traffic, the Bicycle Coalition of Greater Philadelphia made the case to close a major thoroughfare to auto traffic so that open-air travelers, including cyclists, can safely distance themselves from each other. The city obliged, and now the coalition is working on a list of other thoroughfares it would like to have shut down.

How many people, having sampled the delicious exercise and comforting social distance of cycling, will return to public transit? If we end up with long lockdowns in major cities and more thoroughfares shutdowns, expect bicycle sales to take off. You can also expect a lot of those sales will be electric. E-bikes sales are already soaring: Germany’s were almost 1.4 million last year, well before Covid-19 arrived.

There’s one not-so-little exception to the pattern of traffic being down everywhere. Inrix mentions in its national traffic volume synopsis that long-haul truck traffic is flat, “a sign that the national supply chain is holding up so far.” That’s crucial for all of us right now.

Nathaniel Bullard is a BloombergNEF analyst who writes the Sparklines newsletter about the global transition to renewable energy.