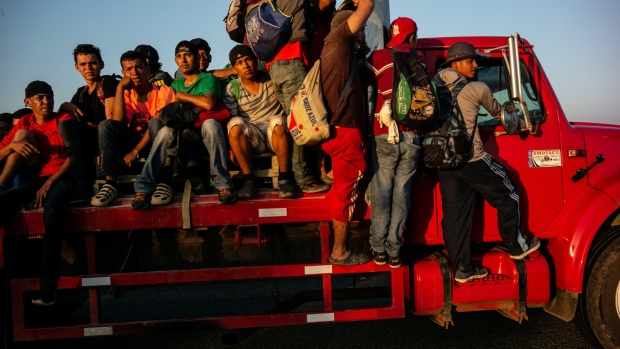 (Bloomberg) -- Honduras, Guatemala and El Salvador are, by all accounts, countries ravaged by gang violence, drug trafficking and extreme poverty. It’s these elements that have driven wave after wave of illegal immigration to the U.S., drawing the ire of President Donald Trump.

And yet the bond market views the nations -- especially the first two -- as stable, almost safe, investments. In some cases, they can borrow at similar rates to regional powerhouses Brazil and Mexico.

It’s an odd thing, almost improbable sounding. And it reveals a surprising truth about these countries: They all have rock-solid fiscal accounts.

How’s that possible in such destitute places? Because, it turns out, they earmark precious little money to basic social programs. Not only does this save them cash, allowing them to hold down their budget deficits, but it has the effect of encouraging the poor -- those who would benefit the most from greater outlays for healthcare or housing -- to emigrate.

This in turn has an added advantage for these nations: The migrants send growing quantities of dollars to their families back home, generating a steady flow of hard currency that is a central pillar of their economies. (For some perspective, their value is roughly 30 times greater than the aid money that a frustrated Trump pulled from the countries this week.)

When all of these elements are stitched together and viewed holistically, it can appear as if the economic model these governments have adopted is one based on exporting people. That might be an over-simplification -- and it may not be the governments’ intent -- but it is the net effect of the policy mix, according to longtime observers of the region.

“Migration is part of the model,” said Seynabou Sakho, the World Bank’s director for Central America. “A country may not have a big deficit, but at the same time, the needs of its people aren’t being met.”

Officials in the finance ministries and presidential offices of El Salvador, Honduras and Guatemala didn’t respond to requests for comment.

Sakho’s colleagues at the World Bank run what they call social-protection studies. They try to measure how much support governments provide for the poor and the vulnerable, and they break their work down into several key indicators: poverty reduction, access to government assistance and the impact of that assistance. The three Central American nations, known collectively as the Northern Triangle, rank toward the bottom in each of those categories.

The World Bank also tracks social spending on a per-capita basis. In El Salvador, the number came to $562. It was even lower in Honduras, $278, and Guatemala, $258. That’s a fraction of the $2,193 spent in Costa Rica or the $2,269 in Brazil. The World Bank hasn’t updated that data set since 2012, but analysts say there have been few signs of improvement in recent years. Patronage and corruption, they say, is compounding the shortfall, siphoning off funds earmarked for the poor. Transparency International ranks the three nations in the bottom half of its Corruption Perceptions Index, with Guatemala in the lowest quartile.

Lucrecia Mack said she was astonished by how rampant graft was when she took the top job at Guatemala’s Health Ministry in 2016. It’s “everywhere,” she said. Documents are falsified, signatures are forged, invoices are made up. She remembers one scheme where officials bought new tires for ambulances, re-sold them to pocket the cash and left the old ones on the vehicles.

“The little money that the Health Ministry has winds up in the wrong hands,” said Mack, the daughter of a renowned human rights activist who was slain in 1990.

According to her calculations, Guatemala only spends about one-fifth of what it should annually on health care. “The budget has always been extremely tight.” As a result, she said, the ministry only has enough public clinics and hospitals to attend to about 6.5 million people. That was the population in 1975. It’s more than doubled since.

Poor infrastructure, like lack of running water and proper sewage in many places, exacerbates the effects of the funding shortfall. Maternal mortality rates, for example, are highest in the rural communities where there are the fewest highways, Mack said. She reeled off a litany of other health problems plaguing the nation: pneumonia, diarrhea, diabetes, cirrhosis, infant mortality, chronic malnutrition.

Mack lasted just 13 months in her post. When the president, Jimmy Morales, expelled a UN-backed body that had begun looking into his government as part of an investigation into organized crime in the country, she resigned in protest.

Hugo Noe Pino paints a similarly bleak picture in Honduras. The former central bank chief says the lack of funding is so extreme that some patients have been left to bring their own screws for surgeries on broken bones in public hospitals.

That’s the sort of horror story that’s often heard nowadays in crisis-torn Venezuela. But Venezuela is broke, having blown through almost its entire stash of hard currency and defaulted on its foreign debt.

Honduras, on the other hand, could easily tap the bond market for additional financing, especially at a time when rock-bottom rates in developed countries are pushing investors to seek better returns elsewhere. So too could Guatemala. Even El Salvador can sell debt at rates roughly in line with those paid by Costa Rica, the playground for American tourists that has been the region’s longtime oasis of stability. But they rarely do. The three countries went two years without selling a single foreign bond among them until Guatemala broke that drought last month.

Fiscal austerity has become such a single-minded priority in these countries -- as a means to keep inflation in check and their currencies stable -- that even the International Monetary Fund, an institution that’s been pilloried for years for pushing draconian budget cuts, has urged Guatemala to spend more. “There’s an obsession with this issue,” said Ricardo Castaneda, an economist with ICEFI, a Guatemala City-based think tank that focuses on fiscal policy.

Pino, who has also served as Honduras’s finance minister, acknowledged that the government has ramped up spending on security some in a bid to tame the violence but said that it came at the expense of health and education programs. Meantime, housing and transportation projects are often under the condition of political support. “They are done selectively and don’t have a significant impact on levels of poverty,” he said.

Even after the increase in security spending, Honduras still doesn’t rank particularly high on a global scale in this category. None of the three countries do. Where they do top the charts is on homicide rates. A World Bank report places El Salvador first, Honduras second and Guatemala 13th.

“Immigration is a symptom of the diseases we have: violence, lack of economic growth, lack of investments in all of the rural areas,” Nayib Bukele said at a conference in Washington a few weeks before being sworn in as president of El Salvador this month. “People don’t leave their families and country to cross three frontiers and a desert because things are fine.”

Bukele’s predecessor, Salvador Sanchez Ceren, did seek to boost social spending during his five-year term. Congress balked at the idea of taking on additional debt, though, and the legislation died. Morales also made a brief attempt to ratchet up expenditures in Guatemala. He was going to fund it by raising the country’s tax rates, which are among the world’s lowest. But the business community mobilized to quickly kill the plan. The two candidates vying to succeed Morales have pledged to try again to boost spending.

Meanwhile, the exodus from the three countries continues to build. More than 144,000 migrants were taken into custody along the U.S. border in May, a 32% jump from April, and the biggest monthly total in 13 years, according to Customs and Border Protection. Almost four-fifths of those apprehended were from the Northern Triangle. (Amazingly, about 1 out of every 200 Hondurans was taken into custody at the border in the month.)

All of this has only served to further rile up Trump.

He vented publicly for days about a migrant caravan moving toward the border late last year. And then in May, he lashed out against Mexico, saying its government wasn’t doing enough to detain and process those migrating illegally or seeking asylum. He threatened to punish Mexico by imposing tariffs, only to back off the idea days later when Mexican President Andres Manuel Lopez Obrador pledged to expand the deployment of the national guard along the country’s southern border.

The migrants, though, will keep coming until things change radically at home.

To contact the authors of this story: Ben Bartenstein in New York at bbartenstei3@bloomberg.netMichael McDonald in Bogota at mmcdonald87@bloomberg.net

To contact the editor responsible for this story: David Papadopoulos at papadopoulos@bloomberg.net, Brendan Walsh