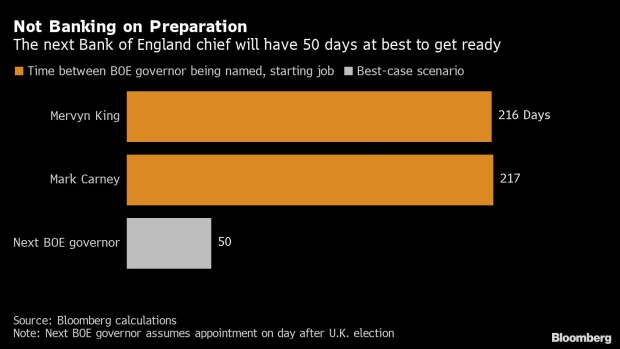 (Bloomberg) -- Central bankers will vie with trade negotiators for the attention of investors this week.

The Federal Reserve and European Central Bank make their final monetary policy decisions of the year on Wednesday and Thursday respectively.

Both are expected to leave interest rates unchanged -- after cutting them earlier in the year -- amid signs global growth is stabilizing. It will be the first meeting for Christine Lagarde since she became president of the ECB.

“A much stronger-than-expected November jobs report will bolster Fed officials’ confidence in their decision to curtail interest-rate cuts in December. The economy may be slowing at year-end, but not nearly enough to trigger Fed Chair Jerome Powell’s ‘material reassessment’ threshold for additional action.”

Much of the Fed and the ECB’s economic outlook for 2020 is dependent on whether the U.S. and China can strike a phase one trade deal that will avoid the imposition of yet more tariffs. The Dec. 15 deadline for fresh U.S. duties is looming and President Donald Trump’s rhetoric has been heated, but talks are still ongoing.

Global markets have largely priced in a agreement and most economists are relying on one for their global growth projections to pan out. So if there’s no accord before Dec. 15, or a postponement of duties, there will be some disappointment.

If that’s not enough, there’s a U.K. election, called in theory to break the parliamentary impasse on how to leave the European Union.

Here’s what happened last week and below is our overview of what’s going on in the world economy in the coming days:

The Fed is set to hold steady after reducing interest rates three times this year amid slowing growth, trade tensions, volatile markets and relentless pressure from Trump. Friday’s blockbuster jobs report will reinforce hopes among policy makers that they’re on the right path. Powell will speak to reporters after the Fed announces its decision on Wednesday. Earlier that day, the latest consumer price data is predicted to show inflation at 2%.

Friday sees the release of retail sales numbers, which are forecast to show growth of 0.4% in November from the previous month. Elsewhere in Washington, trade officials will be trying to seal a deal with their Chinese counterparts. In Canada, Bank of Canada Governor Stephen Poloz -- who just announced he won’t seek another term -- speaks in Toronto on Thursday.

Lagarde’s first monetary policy decision as ECB president will probably not feature a shift in stance. But the occasion provides investors with their first real opportunity to gauge the leadership style and tone of the woman who will manage the euro for much of the next decade, meaning it’s likely to be very closely watched.

Thursday’s general election in the U.K. finally promises to end a hiatus of meaningful economic news there, raising the prospect of a clearer immediate outlook on Brexit, the direction of monetary policy, and even maybe who the next Bank of England governor might be.

On Wednesday, EU leaders will detail plans to take on climate change by overhauling their economy.

Turkey’s central bank is expected to continue aggressively easing monetary policy, with economists predicting a 150 basis-point reduction on Thursday. That’s despite inflation that jumped back to double digits in November, as Governor Murat Uysal looks for ways to boost flagging growth and accommodate demands from President Recep Tayyip Erdogan.

Russia’s central bank will probably also ease by a more modest 25 basis points, according to economists. In South Africa, inflation data will probably show the pace of price growth remained near a nine-year low.

Trade negotiations aside, China’s inflation is expected to quicken again as surging pork prices drive up food costs. Industrial deflation may moderate. But the most closely watched news isn’t on the economic calendar -- it’s whether China and the U.S. can piece together an initial trade deal. While it’s not an official deadline, Dec. 15 is shaping up as a pivotal date as that’s when Trump’s latest batch of tariffs are set to possibly kick in.

Japanese gross domestic product data for the third quarter may be revised up on stronger investment, while Indian inflation likely surged again in November. The Philippines is predicted to leave rates alone on Thursday.

Brazil is expected to cut its benchmark interest rate by 50 basis points on Wednesday, lowering it to an all-time low of 4.5% and likely concluding the monetary easing cycle central bank chief Roberto Campos Neto started late in July. In Mexico, inflation data due on Monday is estimated to remain near the central bank’s 3% target, allowing policy makers to keep cutting rates, currently at 7.5%, in the following week. Meanwhile, in Argentina, consumer price data will be a reminder of the challenges awaiting President Alberto Fernandez, who takes office this week.

To contact the editors responsible for this story: Stephanie Flanders at flanders@bloomberg.net, Zoe Schneeweiss, Craig Stirling