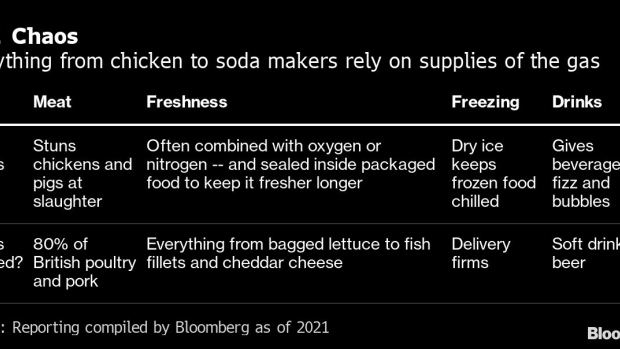 CF’s plant in Billingham, northeast England, is a main source of the UK’s CO2, which is used to stun pigs and chickens for slaughter, as well as in packaging to extend shelf life and for dry ice that keeps items frozen during delivery. Gas is the top input for most nitrogen fertilizer, including ammonia, and CO2 is a byproduct of the production process.

The temporary closure announced on Wednesday will revive memories from a year ago when CF previously stopped production in the UK, sparking chaos across the food-supply chain. Users had been urged to look for new sources of supply. The UK market has diversified its CO2 production since the second half of 2021, but a repeat of that crisis could further exacerbate British food inflation that’s already soaring at the fastest rate in a decade.

The UK government had an early warning over the risk to British industry from the energy crunch, but still faces a crisis from company shutdowns and reduced production. Chemical and fertilizer factories were considered particularly at risk, according to government briefings. Local gas futures are five times higher than a year ago.

CF originally shuttered both in September 2021. Within days, an online grocer stopped offering frozen products due to dry-ice shortages and the meat industry warned it soon would grind to a halt. Temporary government aid and a deal it brokered with the industry to avert shortages had helped it reopen the Billingham plant.

CF has since permanently closed the smaller of its two UK fertilizer facilities. Between the two, they had accounted for as much as 60% of the nation’s CO2 production. The Billingham plant has a capacity of 750 tons of CO2 per day for commercial use. Currently, 42% of the UK’s CO2 supply comes from CF.

The UK government is examining options for the CO2 market to improve resiliency over the longer term, a spokesperson said. The country already has seen an improvement with additional imports, further production from domestic sources and larger stockpiles. The government is engaging with businesses across the food industry on potential impacts, the spokesperson added.

“Whilst we are in a much better position now than we were a year ago, if CF Industries follows through on its threat to close Billingham, the British meat industry will have serious concerns,” he said. “Without sufficient CO2 supplies the UK will potentially face an animal welfare issue with a mounting number of pigs and poultry unable to be sent for processing.”

Kate Halliwell, chief scientific officer at the Food and Drink Federation, said in an email that the group is monitoring the situation and will work with companies to understand the potential impact on food supply.

CF said it has notified customers that buy carbon dioxide on a contract basis from Billingham about the planned halt. The company cited gas prices, which are surging on supply disruptions after Russia’s invasion of Ukraine, as well as the price of carbon, for the closure.

Wholesale fertilizer prices soared to multiyear highs after Russia invaded Ukraine, roiling commodity markets. Russia is a big supplier of every major type of crop nutrient. In a bid to contain rising food costs, the US exempted Russian fertilizer sales from wide-ranging sanctions. Nonetheless, restrictions on other energy exports rippled through the supply chain.

The Billingham plant will continue to produce ammonium nitrate, which can be used as a nitrogen fertilizer, and nitric acid.