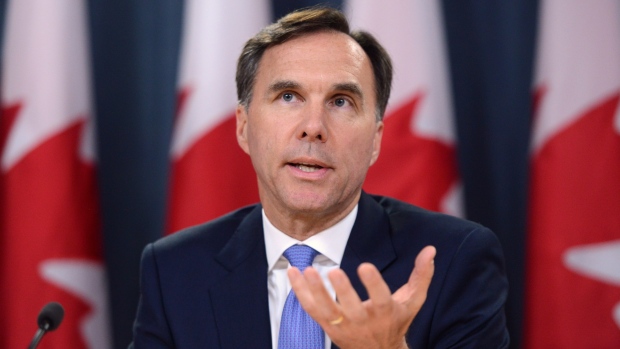 OTTAWA -- Finance Minister Bill Morneau says changes will be necessary to the Trudeau government's contentious proposals to reform parts of the tax system.

Morneau said Tuesday that the government will review the feedback it received on its three-part tax plan during a 75-day consultation period that ended Monday.

The government will respond with changes to its tax plan so that it meets its goal of making sure the system is fair and encourages investment, he said shortly after an appearance before the Senate.

"Changes are going to be required -- as we move forward we will have more information on timing," Morneau said in a brief interview after facing a barrage of pointed questions from senators over the tax proposals.

"We do need to make sure we take into account people's points of view. That means reviewing what we've received, making sure we fully understand it and responding appropriately."

Morneau also suggested that all three parts of the plan could see adjustments.

The government proposals include restrictions on the ability of business owners to reduce their tax rate by sprinkling their income to family members in lower tax brackets, even if those family members do not contribute to the company.

It has also proposed limits on the use of private corporations to make passive investments that are unrelated to the company. A third change would limit the ability of business owners to convert regular income of a corporation into capital gains, which are typically taxed at a lower rate.

The government has already put forward draft legislation for the changes related to capital gains and income sprinkling. The passive investment income proposal remains more of a work in progress.

Morneau suggested changes could be coming for all three components of the plan, including the draft legislation.

"For those pieces of legislation that we've already drafted, we'll take into account what people have told us to determine how we go forward from here," Morneau said.

"So, there will be next steps -- the consultation, though, is closed."

The government, Morneau added, intends to provide clarity as soon as possible for small business owners, who have expressed concerns about the potential negative impacts of the proposals and the lingering uncertainty.

The tax proposals have forced the Trudeau government into a difficult communications battle.

It has faced an onslaught of complaints from a range of sources -- from tech entrepreneurs, to doctors, to tax professionals, to provincial leaders, to backbench Liberal MPs.

Morneau has pitched the changes as a necessity to end tax advantages unfairly exploited by some wealthy business owners. A coalition of organizations, including labour groups, unions and left-leaning think tanks, have supported the proposals.

The words of support have, however, been drowned out by a bigger group of vocal and often well-organized opponents.

The critics contend the tax changes will hurt middle-class business owners, damage the economy, hinder investment and could drive doctors out of the country.

The complaints have even come from provincial and territorial premiers, who met with Morneau in Ottawa earlier Tuesday to learn more about the plan.

"I had a sense that they really understood our objectives, to make sure the system works for all Canadians," Morneau said earlier in the day about his meeting with the premiers.

"I was able to give them a sense of what we've heard, both from them and of course from others, and how we're going to respond."

The government has also faced significant pressure from industry groups and the opposition Conservatives to prolong the consultation period.

The Tories introduced an opposition motion Tuesday that called on the government to extend the consultation until Jan. 31, 2018, but it was defeated in the House of Commons.