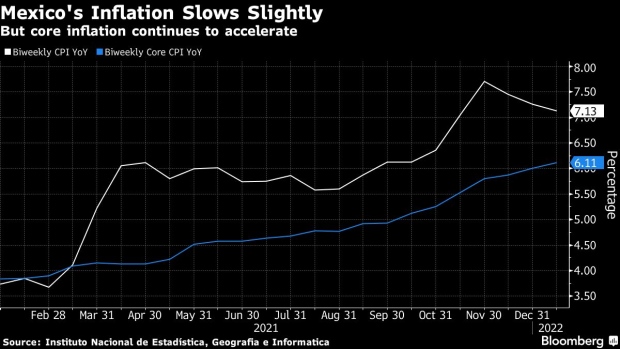 NEW YORK, NEW YORK - OCTOBER 01: People walk through midtown Manhattan as crowds are slowly coming back to the area on October 01, 2021 in New York City. The Manhattan economy, like other large urban hubs in America, depends on workers returning to the office as Covid-19 begins to ebb as a health threat. Increasingly, large companies are staying remote or only requiring workers to come in a few days a week which will have severe effects on restaurants, bars, retail and other businesses that depend on foot traffic. (Photo by Spencer Platt/Getty Images) , Photographer: Spencer Platt/Getty Images North America

Governments in Europe, meanwhile, are focusing on bolstering energy security in the event of war in Ukraine. Central banks in five countries, including Chile and South Africa, raised interest rates to temper price pressures.

Employment costs rose at a robust pace for a second-straight quarter, wrapping up the strongest year of labor inflation in two decades as businesses competed for a limited supply of workers.

Consumer spending adjusted for changes in prices fell last month by the most since February, suggesting that Americans tempered purchases amid the latest Covid-19 wave and the fastest inflation in nearly 40 years.

Economic growth accelerated by more than forecast in the fourth quarter, fueled by the rebuilding of inventories. However, a 1.9% gain in real final sales to domestic purchasers, a measure of underlying demand that strips out the trade and inventories components of gross domestic product, was just slightly ahead of the 1.3% rate seen in the third quarter.

Germany’s economy shrank 0.7% in the fourth quarter with consumers spooked by another wave of Covid-19 infections and factories reeling from supply-chain problems.

The European Union and U.S. are working with other countries to diversify European fuel supplies in case a conflict with Ukraine disrupts shipments from Russia, which provides about a third of the bloc’s natural gas.

Taiwan’s economy expanded in 2021 at the fastest pace in 11 years, with growth set to get another bump this year from an unprecedented spending spree by its largest company.

The Bank of Japan should keep its inflation-targeting stimulus rolling and consider shortening the maturity of its yield target to make its easing framework more sustainable, the International Monetary Fund said. The fund’s recommendations that the BOJ keep pressing ahead with stimulus to spur inflation highlights different circumstances than the BOJ’s counterparts at the Federal Reserve and the Bank of England.

Mexico’s annual inflation slowed slightly less than expected in early January and remained far above target, leaving the central bank in a tight spot amid indications the economy is in recession.

Annual inflation in Brazil slowed less than expected in early January, disappointing investors and underscoring the persistent price pressures the central bank faces as it prepares to hike interest rates next week.

The damage since Russia annexed Crimea and supported separatists in Ukraine’s eastern Donbas region points to the array of options Russia’s President Vladimir Putin has at hand as he applies pressure on both Kyiv and the West, short of a high risk, full invasion aimed at seizing swathes of territory.

Central bankers in Chile, Colombia, Hungary, Kazakhstan and South Africa raised interest rates this week, following peers in South America and eastern Europe to kick off the year by increasing borrowing costs to temper surging inflation. The Federal Reserve signaled it was ready to hike rates in March and Canada said higher borrowing costs were imminent.