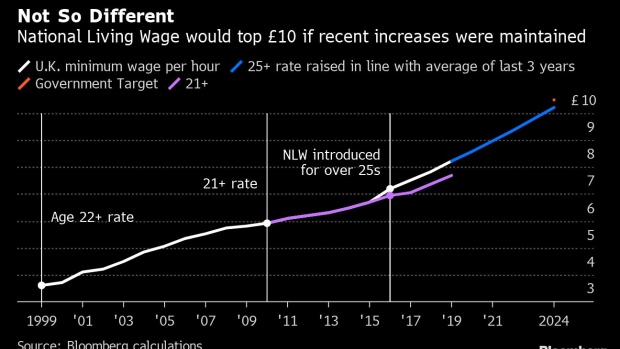 Inflation in the U.S. was more subdued in September and it’s filtering through into increased consumer optimism, while tariffs and a global economic slowdown are exacting a bigger toll on air trade.

The largest share of consumers in records dating back to 1979 anticipate household income growth to exceed inflation over the coming two years, a sign that solid spending will be sustained and help extend the nation’s longest-running expansion.

Job openings unexpectedly declined in August, weighed down by leisure and hospitality, underscoring the slowdown in hiring across American employers even as the labor market remains generally tight.

U.K. Chancellor Sajid Javid made his pay increase for low earners the centerpiece of his policy plans last week. In reality, the boost might not be as glitzy as it seems.

The outlook for China’s trade activity continues to decline thanks in large part to deteriorating air trade, according to an indicator published by Deutsche Post AG’s DHL unit. Its so-called Global Trade Barometer for China -- where a reading below 50 signifies contraction -- fell to 45 in September from 48 a month earlier.

The spread of a pig-killing disease in China is rippling through the global market and strong demand from Asia means more U.S. pork exports could flow to the Asian country. African swine fever has killed millions of hogs in China and elsewhere in Asia, sparking the need for more imports.

The only way to sustainably raise living standards is to improve productivity and on this metric, Saudi Arabia’s performance is dismal.

Bloomberg Economics’ base case is a slowdown for most economies -- including U.S., China and Japan -- and recession for a few -- Germany and the U.K. Risks to that forecast are tilted to the downside.

To contact the editors responsible for this story: Scott Lanman at slanman@bloomberg.net, Sophie Caronello