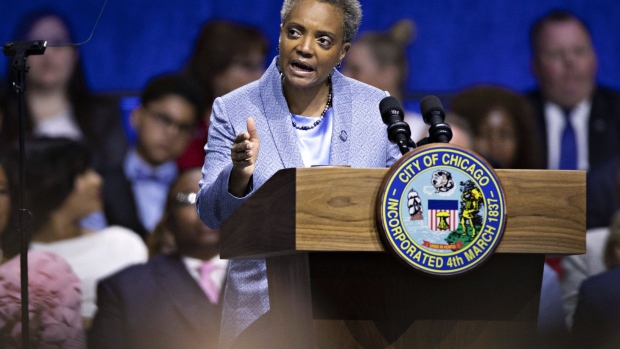 Lori Lightfoot, mayor of Chicago, speaks after being sworn in during an inauguration ceremony in Chicago, Illinois, U.S., on Monday, May 20, 2019. Chicago makes history Monday as Lightfoot becomes its first black, female mayor after sweeping all 50 wards by promising to reform the third-biggest U.S city. , Bloomberg

The Windy City has lost two of its large corporate residents in recent months: Citadel is heading to Miami amid concerns about Chicago’s crime rate and frustrations with political leadership in Illinois, and Boeing Co. plans to relocate its headquarters to Arlington, Virginia, after two decades in Chicago. In June, Caterpillar Inc. made the decision to move its top corporate brass from Deerfield, Illinois -- a Chicago suburb -- to the Dallas-Fort Worth area in Texas.

When asked during her budget address Wednesday about the impact those losses will have on Chicago’s revenue, Lightfoot said simply: “Little to none.”

Citadel is expecting a “few hundred” people to be based in Miami next year, and Ken Griffin, the company’s CEO, said Chicago has been a “remarkable home.” For Boeing, the relocation may be largely symbolic. The vast majority of the company’s 142,000 workers are in factories or other cities far removed from the corporate office.

“It’s unfortunate that those companies choose to relocate, but what I’m focused on is companies that are betting on Chicago -- Google, Kellogg Co., Abbott Laboratories and others -- big notable house names, international companies that are finding what they need here in the City of Chicago,” she said. “The data tells us that Chicago is back, that our economy is booming.”

The mayor also pointed to the city’s growing office occupancy and a recent office expansion from Alphabet Inc.’s Google.

Google already has 1,800 employees in the city’s booming Fulton Market area across the Chicago River, and has been expanding in Chicago since it opened a two-person office nearby in 2000. The company said once renovations are complete in 2026, it plans to have employees in the Thompson Center.

The investment is the “largest corporate expansion in modern Chicago history,” Lightfoot said Wednesday, and will bring a minimum of 3,000 new jobs to the city.

Last year, 173 corporations moved to or expanded their presence in Chicago, Lightfoot said, adding that the city is on track to meet or exceed that number in 2022.

Companies are “betting on Chicago” because of the city’s diverse economy, talent pipeline, reasonable cost of living and city government, she said, touting improvements in hospitality and tourism numbers as the city recovers from the pandemic.

The city kicked off the year with a 13.2% office occupancy growth rate, she said.

(Updates to add 2022 estimates for companies relocating to Chicago. Previous versions of this story were corrected to fix the spelling of Fort Worth and to clarify that two large Chicago-based companies are exiting the city in the second paragraph.)