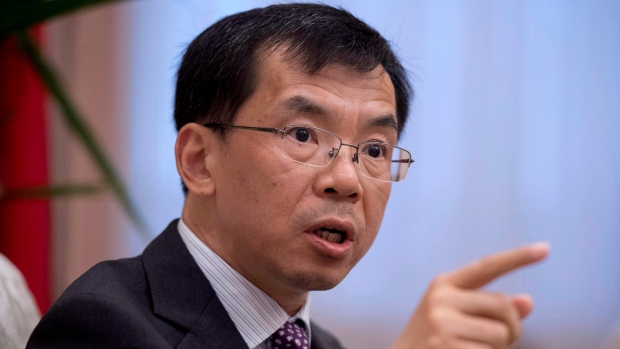 China's Ambassador to Canada Lu Shaye participates in an interview at the Embassy of the People's Republic of China in Canada, in Ottawa on Thursday, June 29, 2017. , The Canadian Press

China's ambassador to Canada is urging this country not to be swayed by the Trump administration when it comes to evaluating Huawei Technologies Co.'s future in Canada's 5G telecom infrastructure.

"The U.S. side uses suppressing Huawei and arresting [Huawei CFO] Ms. Meng Wanzhou to launch, to wage, a trade war against China because Huawei is the most famous high technology enterprise of China," said Lu Shaye in an interview with CTV Power Play Tuesday. "And the U.S. is trying to hinder, to obstruct, China's high-tech development."

The United States and China have been locked in a high-stakes trade dispute for months, with the Trump administration recently announcing several moves that could choke off elements of Huawei's supply chain. Canada has been stuck in the middle of the dispute after Meng was arrested in Vancouver last December at the behest of American authorities. She is now in the midst of an extradition hearing in that city.

"We are also sad on the current situation of bilateral relations [with Canada]. China is not the root cause of this situation," said Shaye, who is reportedly poised to be reassigned by the Chinese government. "We often say that the knot should be untied by those who got them tied. And China is always ready to work together with the Canadian side and meet each other half way."

The Canadian government is presently conducting a security review that will determine whether Huawei will be allowed to play a role in 5G development. While the U.S. has been urging allies to block the Chinese telecom giant, Shaye is calling on Canada to make its own decision.

"I think the Canadian side should take its position from their own interests. I think Canada is an independent country and you have institutions that are very competent to evaluate this problem."