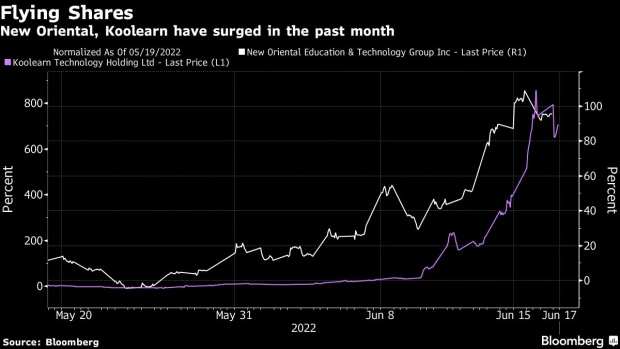 (Bloomberg) -- The rapid revival of Chinese education companies’ business is boosting investor appetite for the stocks that bore the brunt of Beijing’s yearlong regulatory crackdown.

A bellwether of the sector, New Oriental Education & Technology Group Inc., has almost doubled in the past 30 days, turning itself from one of the worst-performing US-listed Chinese stocks since the clampdown into the best this month. Its unit Koolearn Technology Holding Ltd., which has pushed into livestreamed e-commerce alongside its classes, has surged more than 600% in Hong Kong, while the buying spree has spilled over to other players.

The surge adds to the signs that the worst is probably over for the sector now that Beijing has been vowing since mid-March to maintain capital-market stability and boost the economy. It’s also a result of the country’s diverging monetary policy as the rest of the world tightens and lifts Covid restrictions.

The stocks look especially appealing given the plunge in U.S. tech shares: The Nasdaq Golden Dragon China Index has been beating the Nasdaq Composite Index since the end of March.

“When risk appetite returns, those (that) have been beaten up the most rally the first,” said David Waddell, CEO and chief investment strategist at Waddell & Associates. “The macro setup for Chinese equities is positive and now you get almost every Wall Street bank trying to direct investors’ attention there.”

China’s $100 billion education technology sector was almost demolished last year when Beijing urged schools for young students to go non-profit as authorities sought to ease burden for students. Shares of New Oriental Education and TAL Education Group plunged more than 90% within months through July. The drastic, rapid regulatory overhaul deepened fears over the investability of Chinese stocks as a whole.

Citigroup Inc. analysts raised their price target on US-listed New Oriental by 39% after a call with management Thursday, citing the contribution from Koolearn, which combines online learning with livestreamed e-commerce. New Oriental holds more cash than its market value and has a good track record on share buybacks and special dividends, Citi said.

TAL Education’s American depositary receipts have almost tripled since mid-March, while Gaotu Techedu is up nearly 40% in the same period.

To be sure, some investors are skeptical that many Chinese companies that suffered from the crackdown will be able to transform and revive their businesses as New Oriental did.

“The hedge funds and institutional investors are still on the sidelines -- unless they become more active and aggressive in buying, I don’t think that rally is going to be sustainable yet,” said Henry Guo, an analyst at M Science LLC, who believes the recent education rally has been driven by bargain-hunting retail investors.

Still, the edutech surge has lured some investors to look at other stocks hit by the crackdown. This week, Chinese online gaming giant Tencent Holdings Ltd. overtook chipmaker Taiwan Semiconductor Manufacturing Co. as the most-valuable company in Asia following a recent rally.

The Nasdaq 100 Index’s 4% drop on Thursday puts the tech-heavy benchmark down almost 6% for the week, headed for its biggest weekly drop since January as recession fears return to haunt stock markets. The losses this month are set to make this the worst June in two decades. Futures contracts on the Nasdaq 100 climbed 1.1% early Friday, hinting that the index is set for a relief rally to end the week.