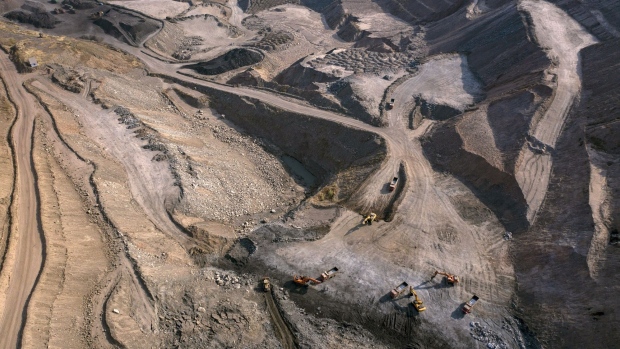 Excavation machinery at the Haizhou Open Pit Coal Mine in this aerial photograph taken in Fuxin, Liaoning province, China, on Monday, Nov. 16, 2020. When the Communist Party took over in 1949, leader Mao Zedong made Fuxin, where coal has been extracted since the 1700s, central to his efforts to modernize the nation. By 2005, easy-to-reach fuel was tapped out and the mine declared bankruptcy and Fuxin is still struggling to adapt. , Bloomberg

(Bloomberg) -- China said it has developed a draft plan to curb methane emissions, even as it stopped short of joining a global pledge to reduce the potent greenhouse gas.

“We’re in the process of getting approval to the draft action plan, which we have already finished,” China’s climate envoy Xie Zhenhua said at the COP27 climate summit in Egypt. China is hoping to seek cooperation on the issue, Xie added.

China is a major emitter of methane, and its plan is seen as significant progress toward keeping global warming within the 2015 Paris Agreement goal. It comes a year after the nation agreed in a joint declaration with the US to outline its strategy for cutting methane releases, which are heavily tied to coal mining operations and agricultural activities in the country.

“China’s newly announced methane action plan puts the icing on the cake for an incredible day for methane,” said Jonathan Banks, global director of methane pollution prevention at Clean Air Task Force. China joins “dozens of countries raising their ambition and others already turning that ambition into action with concrete plans, standards and policies. COP26 was methane’s breakthrough moment; COP27 has given us proof of global momentum.”

Xie’s announcement came during a ministerial meeting of countries that have enrolled in the Global Methane Pledge, an initiative that was first advanced by the US and EU at last year’s climate summit in Glasgow. One-hundred fifty countries have now joined the pledge to collectively cut methane emissions 30% by 2030 -- an achievement US Special Presidential Envoy for Climate John Kerry called “an extraordinary step forward.”

Xie said he had postponed a meeting with German officials to make China’s methane plan public, though he planned to meet with them later.

“My very good friend Secretary Kerry told me about this conference this morning, and he wanted me to come out and share with you our thoughts on methane reduction,” Xie said through a translator.

Kerry praised China for “engaging on this really critical topic” and reiterated the US is willing to provide technical support to the nation.

Capturing methane is no longer just an environmental imperative, said Frans Timmermans, executive vice president of the European Commission. He called it “absolute madness” that “tens of billion cubic meters of methane are flared and vented into the atmosphere” during an energy crisis.

Officials also touted the launch of a new surveillance system -- called the Methane Alert and Response System -- to boost detection of major methane leaks and monitor efforts to mitigate emissions. Fifty member countries are now developing or have developed national plans for taking aim at the greenhouse gas.

(Updates with details on announcement and ministerial meeting from third paragraph.)