China pulled further ahead of other major economies in November as industrial output and retail sales strengthened, reinforcing expectations of healthy growth in 2021.

Industrial production rose seven per cent in November from a year earlier, while retail sales expanded five per cent in the period. Fixed-asset investment grew 2.6 per cent in the first 11 months of the year from the same period in 2019. The data matched the median estimates in a Bloomberg survey of economists. 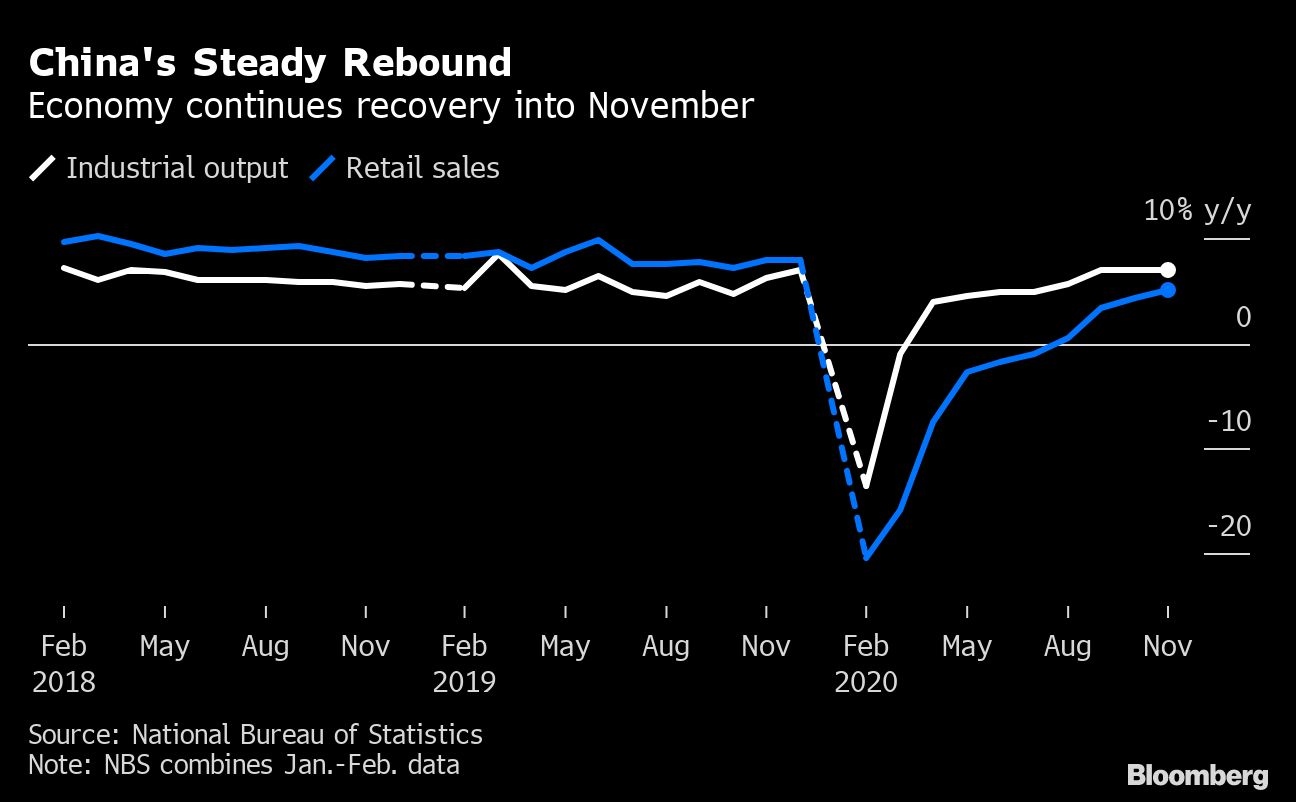 China’s control over the pandemic is widening its divergence with other major nations, many of which are now re-imposing virus restrictions amid new waves of cases. After an early reliance on state-led investment to spur the economy, the latest figures show China’s recovery has broadened out to consumers, with spending on goods like cosmetics and jewelry picking up strongly.

“China’s economy continued to accelerate across all fronts in November,” Louis Kuijs, head of Asia economics at Oxford Economics in Hong Kong, said in an email. “We expect output to remain above-trend in the coming quarters, even as tailwinds from stimulus and exports start to ease,” he added.

Oxford upgraded its estimate for China’s 2021 growth to 8.1 per cent from 7.8 per cent based on Tuesday’s data. Economists surveyed by Bloomberg predict growth will accelerate to 5.9 per cent in the current quarter and reach two per cent for the whole of 2020.

While the strong recovery has given the central bank reason to reassess its policy stance, it isn’t withdrawing support just yet amid a spate of corporate defaults that have roiled debt markets. The People’s Bank of China added liquidity on Tuesday to ease financing pressures, injecting 950 billion yuan (US$145 billion) of one-year cash via the medium-term lending facility, more than offsetting the amount maturing in December. 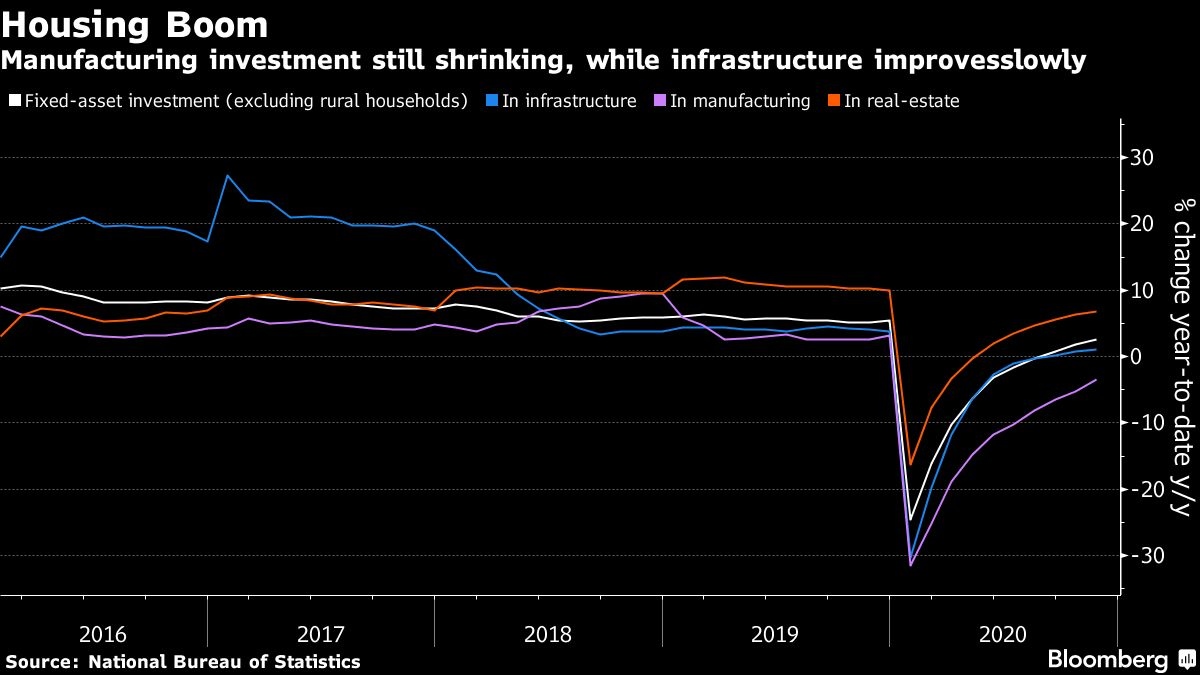 The solid activity reduces the need for the People’s Bank of China to cut interest rates in the near term, but it doesn’t mean the PBOC will be able to withdraw policy support quickly. We expect the central bank to take steps to smooth corporate funding as it begins the long process of policy normalization.

China is benefiting from its status as manufacturer to the world. Exports have rocketed in recent months as new virus restrictions in many of China’s biggest markets fueled demand for medical equipment and work-from-home electronic devices.

Consumer spending was boosted last month by the ‘Singles’ Day’ discount shopping festival, with e-commerce accounting for 25 per cent of retail sales in November.

Still, the recovery has some way to go. Retail growth remains below the eight per cent-plus pace reached last year, and for the first 11 months of 2020, sales were still down 4.8 per cent year-on-year. Restaurants and catering declined 0.6% in November from a year ago, suggesting that consumers are still somewhat nervous about eating out.

Liu Li-gang, chief China economist at Citigroup Inc., said the economy’s recovery so far has been unbalanced, with domestic demand, as reflected by retail sales, remaining “quite sluggish.” However, there’s likely to be a stronger cyclical rebound in 2021, he said in an interview on Bloomberg TV.

The latest economic indicators point to fourth quarter growth that’s likely to be better than the previous three months, according to Fu Linghui, a spokesman for the National Bureau of Statistics. He also projected “relatively fast” expansion in 2021 driven by consumption.

Goldman Sachs Group Inc. also upgraded its growth forecasts based on Tuesday’s report, raising this year’s to 2.4 per cent from two per cent and next year’s to eight per cent from 7.5 per cent.

The data suggested that private sector sentiment is improving, with fixed asset investment by privately-owned companies up 0.2 per cent in the 11 months through November, the first positive reading this year.

“The impressive export growth in 2020, by helping to boost the V-shaped recovery in the domestic economy since the second quarter of 2020, has for the past couple of months reduced the government’s need to ramp up infrastructure spending,” Nomura Holdings Inc. economists led by Lu Ting wrote in a note. “That said, we expect manufacturing investment growth to remain elevated in coming quarters.”