China posted the weakest industrial output growth since 2002 and slumping retail sales in July, as a cyclical slowdown and trade tensions add to the case to roll out more stimulus.

Industrial output rose 4.8 per cent from a year earlier, retail sales expanded 7.6 per cent, and fixed-asset investment slowed to 5.7 per cent in the first seven months. While some seasonal effects likely compressed the data, all results were lower than forecast by economists in a Bloomberg survey.

The output data coupled with weak credit demand in the month signal that the world’s second-largest economy is still struggling to stabilize. A partial delay of President Donald Trump’s next tranche of tariffs is cheering markets, but adds little in the way of certainty for export companies already reeling from the year-long standoff.

“The economy is facing strong headwinds and decelerating,’’ said Gene Ma, chief China economist at the Institute of International Finance in Washington. “More targeted monetary and credit easing are needed. We expect some sort of interest rate cut in the fall.’’ 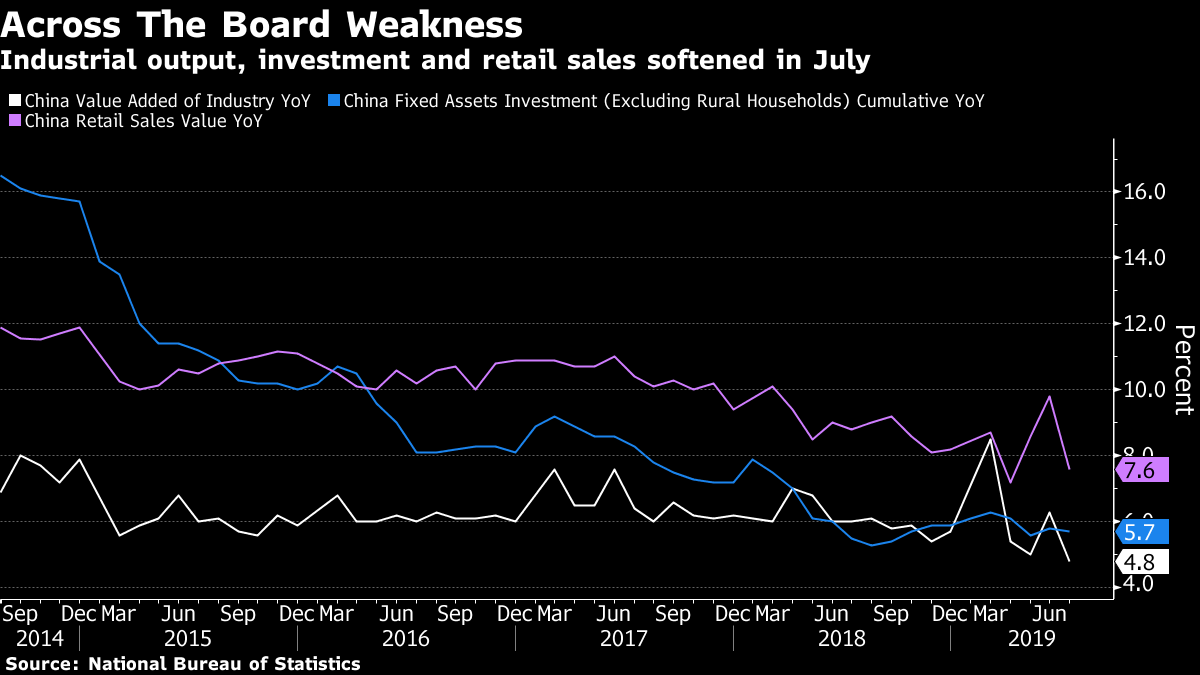 Stocks climbed across most of the region after the S&P 500 Index had its biggest intraday gain in more than two months on the trade tariff delay. Still, the softer than expected data kept sentiment in check with Treasuries edging higher and the yen clawing back some of Tuesday’s loss.

Manufacturing output slowed to the weakest increase since at least 2013, while infrastructure investment growth, a key pillar of the government’s stimulus strategy, weakened to 3.8%. While the tariff war is accelerating the shift of China’s economy away from factories and toward services and retail, the July data showed declining sentiment there too.

Retail sales continue to be depressed by the ongoing contraction in auto sales as buyers in the world’s largest car market scale back. In July, China put in place an upgrade in emission standards in areas that count for over 60% of national auto sales. The earlier than expected switch weighed on automakers, as consumers postponed purchases while discounts up to 50% offered by automakers and sellers trying to clear inventory further undermined companies’ profitability.

Even excluding auto sales, retail sales growth was weaker than the year-to-date average, according to the National Bureau of Statistics. The pace slowed to 8.8 per cent in July from an average of 9.2 per cent in 2019.

The tariff delay “doesn’t really change the outlook on the trade tensions,” said Louis Kuijs, chief Asia economist at Oxford Economics in Hong Kong. “We expect further policy easing in the coming months to help stabilize growth amid the above headwinds.”

So far, policy makers have relied on a mix of tax cuts to spur spending, and targeted monetary incentives for banks to lend to businesses. That hasn’t been enough to arrest the slowdown, and economists are beginning to call for more aggressive measures, even in the face of rising debt and persistent financial stability risks.

There’s little evidence that the trade war with the U.S. will reach resolution soon, even as Trump Tuesday signaled ‘progress’ in a call with negotiators from the two countries. The U.S. has delayed the imposition of new tariffs on a wide variety of consumer products including toys and laptops until December.

“The top three cyclical drivers, which are exports, infrastructure spending and property investment, are all slowing,’’ said Larry Hu, head of China economics at Macquarie Securities Ltd. in Hong Kong. “More liquidity easing measures such as reserve-ratio cut is likely in the near term, but they are not enough to turn the economy around. The economy would face more headwinds in the coming months.’’

The central bank has tweaked the method to evaluate banks’ lending, hoping more credit will flow to manufacturers and small firms, and cutting the amount of money some banks park at the central bank. In addition, a revamp to the current interest rate framework is seen as a method to lower borrowing costs. For now, policy makers are not signaling that a cut to the economy-wide benchmark interest rate is on the cards.

On monetary policy, a weaker yuan goes some way to loosening monetary conditions. We expect further easing in the form of cuts in the reserve requirement ratio and the benchmark interest rate. We expect central bank to cut the RRR by another 150 basis points before the year-end, with at least one RRR cut in 3Q. The probability of interest rate cuts in 2H has also risen. -- Chang Shu and David Qu, Bloomberg Economics

The surveyed jobless rate rose in July to 5.3 per cent from 5.1 per cent the previous month, a development the National Bureau of Statistics said was due to recent graduates hitting the labor market.

“July’s activity data was woeful,’’ said Katrina Ell, an economist with Moody’s Analytics in Sydney. “It is a product of softness on both the demand and supply side. In a weakened and cautious economic environment, easier credit conditions aren’t being exuberantly adopted.’’

--With assistance from Tian Ying and Jiyeun Lee.