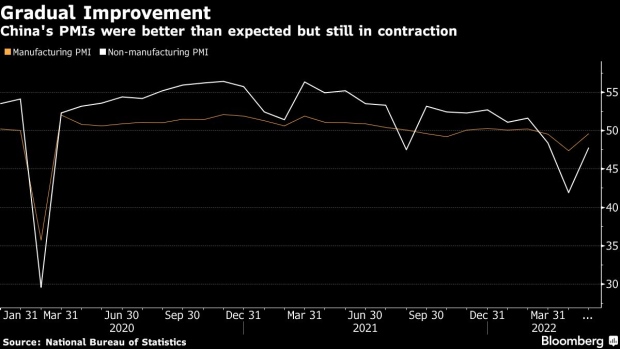 (Bloomberg) -- China’s carbon emissions have posted their longest sustained drop in a decade due to Beijing’s efforts to rein in the property market, boost clean energy and control the spread of the virus.

Carbon output dropped 1.4% in the first three months of 2022, marking three consecutive quarters of falling emissions that began last summer when the government tightened its policies on the real estate sector, according to a blog post for Carbon Brief by Lauri Myllyvirta, an analyst at the Centre for Research on Energy and Clean Air.

The run is likely to extend to a full year after the recent lockdown of Shanghai and other Covid Zero restrictions savaged the economy. In April, thermal power generation fell by the most since 2015, while the period has also seen slumps in building materials output and refined oil consumption, Myllyvirta said.

China is the world’s worst emitter, mostly because of its reliance on coal as a fuel and its dependence on construction to boost growth. But it’s also a leader in the clean energy sources that’ll eventually replace the dirtiest fossil fuel.

The Chinese economy’s long-haul to recovery is sure to involve another round of increased government spending on infrastructure, which means using more highly pollutive cement, steel and coal. But support for construction has also benefited low-carbon technologies, with wind and solar installations on track for another record year of growth, according to the blog. Other grounds for optimism include the fact that steel output is becoming cleaner, while the pickup in electric vehicles continues to skyrocket.

China has pledged to peak emissions by 2030, the most significant milestone on the road to net-zero by 2060, so it seems highly likely that they’ll rebound from their Covid-induced decline this year. Still, for that to happen depends on three factors: the scale of the government’s infrastructure program; whether it allows the property market to inflate again; and the pace of renewable energy investments, Myllyvirta said.

China’s factories continued to contract but at a slower pace in May as many of the country’s tightest Covid restrictions began lifting gradually in some areas, indicating the worst of the current economic slump is close to an end.