China’s economy stabilized last quarter after slowing to the weakest pace in almost three decades, with the first acceleration in investment since June signaling that a firmer recovery could be underway.

The world’s second-largest economy expanded by 6.1 per cent in 2019, slower than 6.6 per cent the previous year but in line with the government’s target. The signing of the phase-one trade deal with the U.S. this week combined with recovering global demand has improved the outlook for Chinese factories and exporters in 2020, though uncertain implementation of that deal and domestic financial fragility remain risks. 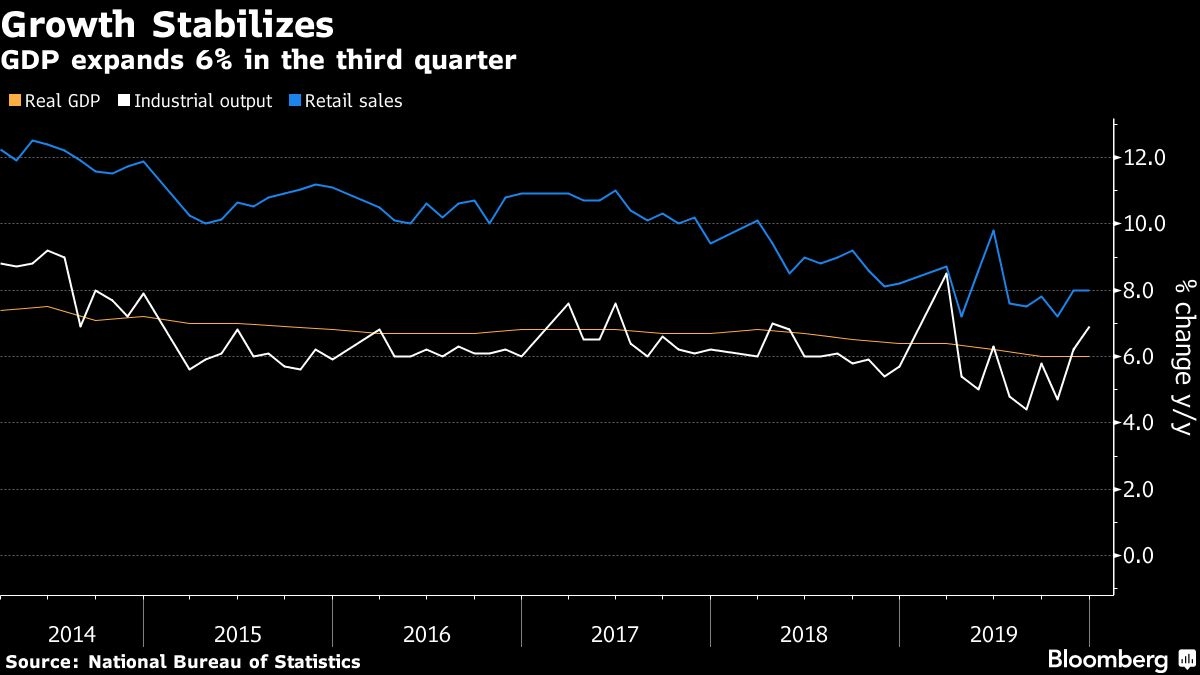 Industrial output rose 6.9 per cent in December from the same period the previous year, versus the median forecast of 5.9 per cent. Some of that may be due to the effects of Chinese New Year. That holiday is earlier this year than in 2019, and companies may have increased production in December ahead of a shutdown later this month. Retail sales rose eight per cent versus an estimate of 7.9 per cent.

“The latest GDP and IP data provides a very positive start to the Chinese New Year for China’s economy,” said Rajiv Biswas, Asia Pacific chief economist at IHS Markit in Singapore. “The outlook for 2020 is for continued robust growth, boosted by the Phase One trade deal with the U.S. and the continued positive impact of government monetary and fiscal policy stimulus measures.”

The surveyed unemployment rate ticked up to 5.2 per cent in December from 5.1 per cent, signaling that the manufacturing-led slowdown in 2019 may be filtering through to the labor market.

Stronger-than-expected activity in December points to further stabilization in early 2020. The signing of the ‘phase-one’ trade deal takes China out of the most turbulent waters, but it will hardly be smooth sailing ahead -- sizable U.S. tariffs will continue to weigh on the external sector, and sentiment is weak.

About 58 per cent of China’s growth in 2019 was due to consumption, with investment adding 31 per cent and the remaining 11 per cent from net exports, Statistics Bureau head Ning Jizhe told journalists after the data was released Friday in Beijing. That contribution of consumption was lower than in 2018, indicating that efforts to rebalance the economy away from reliance on an investment-led model still have a way to go.

One factor in that is likely to be the weak growth in incomes in 2019. Per capita incomes grew 5.8 per cent in the year, below the 6 per cent real growth of the economy. The slower growth in real incomes was partly due to higher inflation, according to Ning, who said he expects personal income and consumption to continue growing this year.

Policy makers have signaled they are prioritizing economic stability in 2020, with stimulus to be kept basically unchanged. Data released Thursday showed that overall credit growth held up in December and a gauge of borrowing costs fell, indicating that policy makers are beginning to see some progress in channeling credit to the economy.

“All we can say is that China’s economy is stabilizing. It’s hard to forecast if the trend will continue in 2020 and if there will be a rebound,” said Betty Wang, senior economist at Australia &New Zealand Banking Group. “The trade deal provided some short-term support for the economy, but there still exists great uncertainty in the long run.”

The number of births per 1000 people declined to 10.48, the lowest level on record according to National Bureau of Statistics data going back to 1949 when the Communist Party took power. China’s working-age population -- thoseaged 15 to 59 -- declined by 890,000, the figures released Friday showed. The number of newborns in 2019 fell to 14.65 million, a decrease of 580,000 from the year before.

That underlines the longer-term challenges that the economy faces, from demographics to an increasingly heavy debt load. Policy settings agreed by the top leadership last month are due to be signed off by the nation’s legislature in March.

For now, officials remain wary of boosting monetary stimulus and are focusing on the effectiveness of fiscal policy. Economists see the growth target for 2020 being set at “about 6 per cent,” signaling an acceptance of the long-term slowdown that the nation is on.

December’s data provides support to the argument that the current policy mix is the right one, according to Michelle Lam, greater China economist at Societe Generale SA in Hong Kong.

“Retail sales growth were steady, indicating still pretty resilient consumers despite growing downward pressure on the labor market,” she said. “This, together with the “phase one” deal, surely reduces the downside risks to the economy for 2020, offering comfort to policy-makers to stick with a measured easing approach.”

--With assistance from Tomoko Sato, Lin Zhu and Kevin Hamlin.