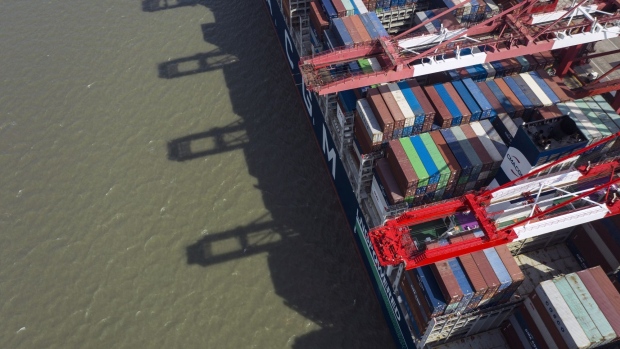 A container ship at the Yangshan Deepwater Port in Shanghai, China, on Tuesday, July 5, 2022. Senior US and Chinese officials discussed US economic sanctions and tariffs Tuesday amid reports the Biden administration is close to rolling back some of the trade levies imposed by former President Donald Trump. Photographer: Qilai Shen/Bloomberg , Bloomberg

(Bloomberg) -- China’s surprisingly strong export growth in July lifted its trade surplus to another record and provided some much-needed economic support, but the country will still have to find ways to keep its fragile recovery on track as the global economy slows this year.

The nation’s trade balance climbed to about $101 billion last month, while exports in dollar terms grew 18% from a year earlier -- far higher than economists’ estimates of a 14.1% gain.

That’s good news for the world’s second-largest economy, given concerns that waning global demand would hurt one of the country’s strongest contributors to economic growth during the pandemic era. Economists, though, warn the export surge likely won’t last forever.

“The health of China’s economy in the second half of 2022 largely depends on whether domestic demand could take up the baton from the slowing external demand,” wrote Larry Hu, head of China economics at Macquarie Group Ltd., in a note.

Hu expected China’s trade surplus, which last month reached the highest in data compiled since 1987, could narrow in the coming months as the global economy continues to slow and as the Chinese economy recovers from a trough in the second quarter.

The strength in exports was mainly supported by automobiles, steel products and textile-related products, according to an analysis by Goldman Sachs Group Inc. Export growth of automobiles accelerated to 64% year-on-year in July from 21.2% in the previous month, while the rise in shipments of steel products remained solid at 41.2%, the firm’s economists including Chen Xinquan wrote in a note.

Shipments to the Association of Southeast Asian Nations and the European Union were among the strongest, up 33.5% and 23.2% respectively, according to a country breakdown. China’s exports to Russia also jumped significantly by 22.2% in the month, following a drop of 17% in June.

“Surprising strength in China’s exports in July should support the economy. It won’t last much longer. Exporters catching up on business that was delayed by lockdowns has masked weakness in external demand. With such pent-up shipments fading, exports are poised to slow over the rest of the year -- eroding a key cushion for growth and leaving the economy more vulnerable to pressures from the property turmoil and Covid-Zero shackles.”

Macquarie’s Hu said the resilience in exports could be a result of China’s Covid Zero strategy, which “benefits production at the cost of consumption,” and added that a weaker yuan this year and price effects could help explain the export data. He pointed out that China’s export price inflation is largely in line with the US CPI inflation.

“In July, about half of headline export growth is likely due to the price effect,” he wrote.

China’s Covid Zero strategy, though, has weighed on the demand side, Hu added. Imports in July rose by 2.3%, compared with a 1% gain in June and lower than the median estimate for an increase of 4%. Aside from a climb in crude imports, inbound shipments of commodities including soybeans, natural gas and copper declined on a monthly basis.

Domestic demand has remained sluggish this year as Covid outbreaks and lockdowns have kept people in their homes and deterred them from spending. The threat of repeated restrictions should flare-ups recur has also weighed on sentiment.

Beijing has adopted a host of measures to bolster demand this year, including cutting purchase taxes on some low-emission passenger vehicles and calling on local governments to support reasonable demand in the housing market, which has remained a concern this year amid tumult in the property sector.

At a Politburo meeting last month, authorities said the country should strive for “the best outcome” possible for economic growth in 2022, releasing a statement that didn’t explicitly refer to the growth target of “around 5.5%,” which economists think is out of reach.

The same week as that meeting, China’s top leaders told government officials that the goal should serve as guidance rather than a hard target that must be hit, according to people familiar with the matter.

(Updates throughout with additional context and economist commentary.)