Consumption in China Will Pick Up: CCB International

China’s economy roared back to pre-pandemic growth rates in the fourth quarter as its industrial engines fired up to meet surging demand for exports, pushing the full-year expansion beyond estimates and propelling its global advance.

Gross domestic product climbed 6.5 per cent in the final quarter from a year earlier, pushing growth to 2.3 per cent for the full year. That leaves the world’s second-largest economy driving global growth and potentially passing U.S. GDP sooner than previously expected.

The V-shaped recovery from the biggest slump on record was engineered by getting COVID-19 under control and deploying fiscal and monetary stimulus to boost investment. Growth accelerated as the nation’s factories revved up to meet demand for medical equipment and work-from-home devices in an export bonanza that saw it ship 224 billion masks from March through December -- almost 40 for every man, woman and child on the planet outside of China.

While the revival makes China the only major global economy to have expanded last year, it didn’t come without cost as long-term imbalances worsened. Consumption lagged industry as workers tightened their belts and income inequalities widened, as they have elsewhere around the world. 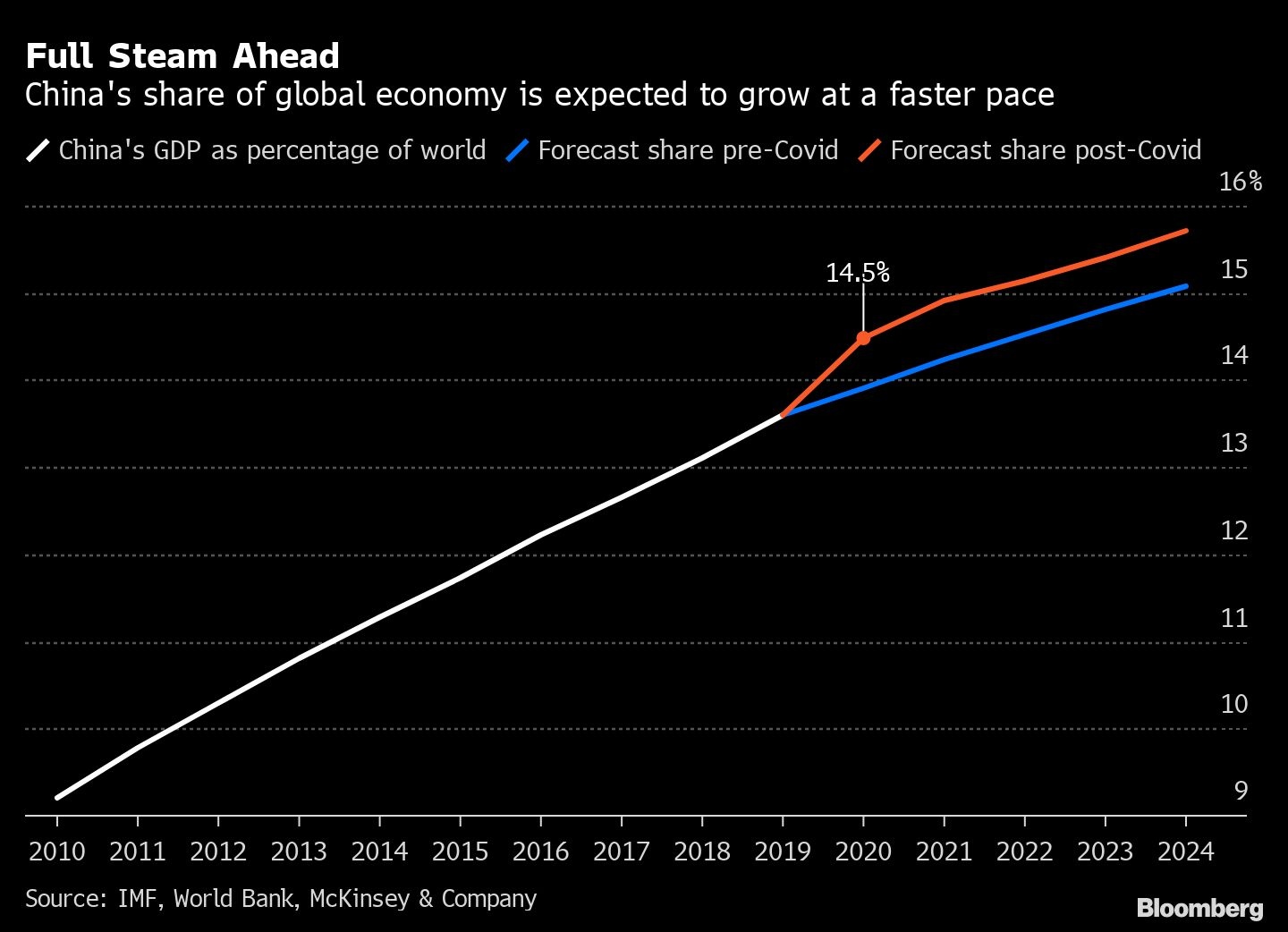 “There’s a huge discrepancy between production and consumption,” said Bo Zhuang, chief China economist at TS Lombard. “I am not very optimistic about domestic demand, as wage growth is not back to pre-pandemic levels.”

The stimulus to support the economy through the pandemic has been accompanied by a surge in debt which authorities are now seeking to curb as the recovery takes hold. At a December meeting to lay out economic goals for 2021, the ruling Communist Party signaled that stimulus would be gradually withdrawn, although it would avoid any “sharp turns” in policy.

Economists surveyed by Bloomberg had predicted a 6.2 per cent expansion for the quarter and 2.1 per cent for 2020

The Chinext Index of small caps closed 1.9 per cent higher, while the yield on the most actively traded contract of 10-year government bonds rose 3 basis points as of 4:12 p.m. in Shanghai to 3.17 per cent, set for the highest in two weeks. The onshore yuan weakened 0.07 per cent to 6.4864 per dollar as the greenback rebounded.

Emerging from the pandemic larger than when it started is a capstone to a dramatic year for the world’s second-largest economy, which began 2020 with a historic first-quarter slump when the coronavirus lockdowns brought most activity to a halt.

“The Chinese economy accelerated to a strong finish to 2020, though challenges at the start of 2021 could put a damper on growth.

“Data for December suggests that the gap between demand and supply is opening up again, and this may reflect the impact on consumption from recent viral outbreaks.”

Even though China’s annual growth was the slowest in four decades, a global contraction in output means China increased its share of the world economy at the fastest pace on record, according to World Bank estimates. Based on projections from the International Monetary Fund, China will now overtake the U.S. by 2028, two years earlier than previously predicted, according to Nomura Holdings Inc.

“China is the only major economy to squeak out growth last year, a testament to their successful pandemic containment efforts,” said David Chao, global market strategist for Asia Pacific (ex-Japan) at Invesco Ltd. “Looking forward to 2021, all eyes will be focused on whether China’s dual-circulation strategy -- relying on internal consumption-driven growth -- will take off.”

Economists expect China’s GDP will expand 8.2 per cent this year, continuing to outpace global peers even as they begin to recover due to a roll-out of vaccines.

Growth this year will depend on whether China can prevent a large-scale resurgence of virus infections, and on whether it can pass the baton of spending from local governments and large state companies to consumers and private businesses. The government has recently imposed travel restrictions on several northern cities due to small-scale virus outbreaks, including locking down the capital of Hebei province, a city of 11 million people near Beijing.

Consumption spending per capita fell 4 per cent in 2020 from a year earlier after adjusting for inflation, while investment in fixed assets such as real estate and infrastructure grew 2.9 per cent, according to the statistics bureau. Industrial production surged, with China producing more than 1 billion tons of crude steel in 2020, an annual record.

“There is relatively large room” for China to raise the contribution rate of final consumption to economic growth, the head of the statistics bureau Ning Jizhe said after the data was released at a press conference in Beijing. For 2021, “it is necessary to improve the consumption ability of residents, improve consumption policy and environment, and cultivate more consumption growth drivers.”

China’s increasingly tense relationship with the U.S. could also weigh on the outlook. In his final weeks in office, President Donald Trump has tightened restrictions on Chinese businesses to curb the nation’s dominance in high-tech industries, roiling financial markets. It’s still unclear if the incoming administration under Joe Biden will maintain those measures.