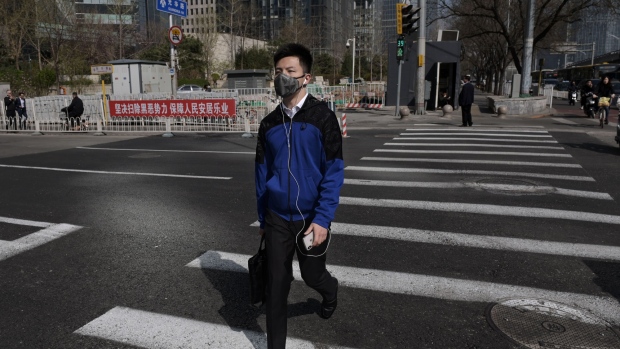 A man wears a protective mask to reduce the effects of air pollution in Beijing, March 2019. , Nicolas Asfouri/AFP via Getty Images

Chronic illnesses like stroke, heart problems and lung cancer became the top causes of premature death in China over the last three decades, according to a new study showing health trends that increasingly resemble the U.S. and other advanced nations.

The study, published this week in the Lancet, showed those conditions replacing lung infections and neonatal disorders as the lead killers in China. The analysis offers a bird’s eye view of the new pressures facing Asia’s largest economy. As China grapples with more complex and long-running diseases that are expensive to treat, the shift is increasingly likely to drive up its health-care costs.

About 90 per cent of America’s US$3.3 trillion in annual health-care expenditure is for people with chronic and mental health conditions, according to the Centers for Disease Control and Prevention.

“Like many countries, China has reached a tipping point over the past three decades,’’ said Maigeng Zhou, an official at an offshoot of the Chinese Center for Disease Control and Prevention, who helped lead the study. “Going forward, the burden of chronic health problems, especially among the elderly, will far exceed infectious diseases.’’

The research showed substantial differences in health problems at the provincial level. People in urban, coastal and wealthier provinces in eastern China are healthier than those in rural and poorer areas in the west, the research showed. Meanwhile, the national diabetes rate increased more than 50 per cent between 2000 and 2017 due to changing lifestyles, including increased consumption of red meat and decreased levels of physical activity.

China is pushing to reduce pressure on its public health system by attempting to reduce drug prices and encourage more investment in hospitals.

The suicide rate for women in China fell sharply from 21.5 deaths per 100,000 people in 1990 to 7.5 deaths in 2017 amid greater opportunities for women, the analysis showed. Suicide rates among men also dropped.

The nation has benefited from the declines in maternal and child mortality rates over nearly three decades that have accompanied economic growth, as well as its efforts to implement national programs to tackle infectious diseases, according to the study. Part of a project called the Global Burden of Disease conducted by the Institute for Health Metrics and Evaluation at the University of Washington, it studied data from 1990 to 2017.

In the U.S., heart diseases were the leading cause of death in 2016, followed by cancer, accidents, chronic lower respiratory diseases and stroke, according to the CDC.

Chronic obstructive pulmonary disease, or COPD, and liver cancer were also the leading causes of death in China.