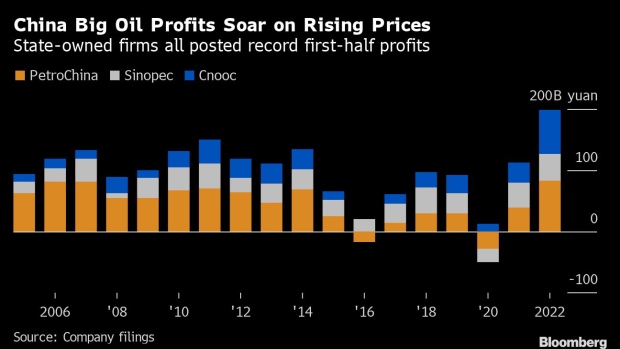 A PetroChina Co. gas station in Beijing, China, on Friday, Aug. 19, 2022. PetroChina, the country’s biggest oil and gas producer, is weighing a plan to carve out its marketing and trading business and seek a separate listing, people with knowledge of the matter said. Bloomberg , Bloomberg

PetroChina Co., Sinopec and Cnooc Ltd. each said they made historic amounts of money in the January-to-June period as surging prices for the oil and gas they produce outweighed higher import costs and sputtering domestic fuel consumption.

The firms are expecting a turnaround in the economy to help results going forward. PetroChina’s chairman Dai Houliang said government stimulus packages are bolstering oil demand, while top refiner Sinopec said it expects domestic fuel sales to jump 11% in the second half over the first.

“We are confident that market demand will keep recovering due to the easing of the pandemic and the implementation of favorable policies from the central government,” President Ma Yongsheng told an earnings briefing on Monday.

The executives’ optimism doesn’t necessarily match up with broader forecasts for the economy, which are turning more bearish. Bloomberg’s latest survey has economists downgrading their growth projections further for 2022 as turmoil in the property market and Covid outbreaks persist.

The oil firms cautioned that the global economy faces threats from stagflation and geopolitical tensions, the latter of which is likely to keep energy prices volatile. Global crude averaged $105 a barrel in the first six months, more than 60% higher than the same period in 2021, providing a windfall to producers after several years of depressed prices.

Company spending plans should also aid the government’s efforts to stimulate the economy. All three firms boosted capital expenditure over the first six months, and PetroChina and Sinopec are expecting a sharp acceleration in spending in the second half as they seek to keep growing oil and gas output to help meet China’s energy security needs.

(All times Beijing unless otherwise shown.)

China is leading the revival of nuclear power across the globe as it grapples with the threat of energy shortages and its reliance on coal. The nation is in the midst of the largest build-out of reactors in the industry’s history, which will see it topple the US as the world’s biggest producer.

A pileup of problems -- from the property slump to Covid flareups and power shortages -- is likely to drive China’s PMIs even lower in August.