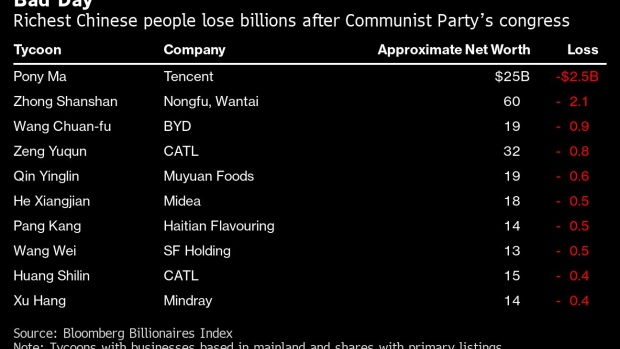 (Bloomberg) -- The richest tycoons doing business in China have lost more than $9 billion in the market selloff that followed Xi Jinping’s tightening grip on the government.

Tencent Holdings Ltd.’s Pony Ma and the nation’s wealthiest person, Zhong Shanshan, each lost more than $2 billion on Monday as shares of their companies tumbled after the Communist Party’s leadership reshuffle, according to the Bloomberg Billionaires Index. Alibaba Group Holding Ltd.’s Jack Ma, Baidu Inc.’s Robin Li and JD.com Inc.’s Richard Liu aren’t included as their firms’ primary listings are in the US, though the stocks are falling in premarket trading.

Xi’s move to put his closest allies at the top of the leadership ranks is raising concern that China’s crackdown on wealth and private businesses will continue. An index tracking the nation’s shares listed in Hong Kong sank more than after any Communist Party congress since its inception 1994 and foreigners sold a record amount of stocks via trading links in the city, while the yuan weakened to its lowest level since January 2008.

“The slump today reflects the fragile investor sentiment,” said Kenny Wen, head of investment strategy at KGI Asia in Hong Kong. “People are just trying to hold on and look for more implications for the Chinese economy after the reshuffle.”

Even before Monday’s slump, China’s wealthiest people were on track for their worst year in a decade as Xi’s strict Covid policies have taken a toll on the economy. As of Friday, there were 76 Chinese billionaires worth $783 billion among the world’s 500 richest people, compared with 79 tycoons with a $1.1 trillion net worth at the end of last year, according to Bloomberg’s wealth index.

While Xi’s reappointment for a precedent-breaking third term wasn’t a surprise, his elevation of loyalists is breaking from the collective leadership model that underpinned the nation’s rise, with now fewer voices at the top to question his policies. The move indicates the nation is likely to stick with its stringent Covid approach that has hurt the economy. A slew of data released on Monday after abrupt delays last week showed a mixed recovery, and economists remain wary about future growth.