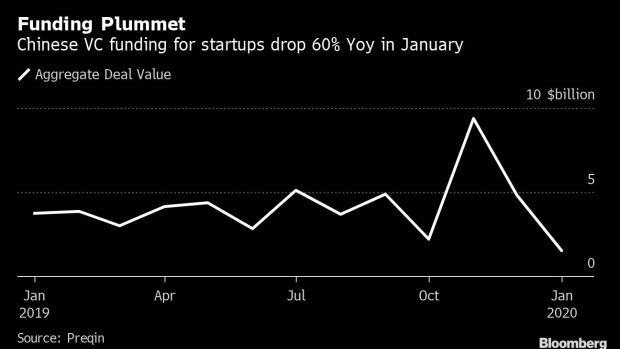 A Chinese woman wears a protective mask as she waits for a bus at a usually busy stop in Beijing, on Feb. 13. , Photographer: Kevin Frayer/Getty Images

Investment in an industry that runs on face-to-face contact and gut instinct has fallen off a cliff since the epidemic erupted in January. Venture capital funds slashed startup investment by 60% in January from a year ago, London-based consultancy Preqin estimates. That’s because angel investors and venture capitalists accustomed to road-testing new technology or grilling entrepreneurs in person now shun interaction and work from home.

China’s tech industry -- which prides itself on honing online communications from social media to mobile payments -- is thus ironically stumbling thanks to the lack of the most basic forms of human contact. If the situation persists -- and there are few signs that stringent nationwide quarantine measures will unwind soon -- that jeopardizes a swath of the millions of startups that collectively represent an important growth driver for the world’s second largest economy. It’s a double-whammy for an industry that in 2019 grappled with volatile capital, a slowing economy and U.S.-Chinese tensions.

“As an entrepreneur who went through SARS in 2003, I fully understand the challenges entrepreneurs face,” Neil Shen, the founding partner of Sequoia Capital China, said in a statement. “We will fully stand by to provide help and support to the companies we backed in any way possible,” said Shen, regarded by many as one of the country’s most prominent tech investors.

A backlash against China’s tech champions in 2019 had begun damping a decade or more of go-go optimism and investment that fueled one of the fastest and largest creations of wealth the world has seen. Trade curbs imposed by Washington soured investor interest, suppressing deal flow. On a global stage, WeWork’s implosion fanned caution around potentially overblown tech valuations. The euphoria that created more than 100 unicorns, or billion-dollar firms, in China dissipated toward the end of last year.

The outbreak was the last thing China’s tech sector needed.

“This hasn’t been the start to the year of the rat that China was hoping for,” said Ee Fai Kam, head of Preqin Asian operations, adding that the setback is “coming on the back of a bruising 2019 when trade and tech tensions with the U.S. caused investors to exercise an abundance of caution.”

Following the Lunar New Year break, some of the country’s most prolific investors – including those at Matrix Capital and Genesis Capital -- confined themselves to home, calling off meetings and mothballing visits to companies. “A lot of our projects require on-site due diligence and we are wary to push forward deals without it,” explained Snow Hua, a managing partner at Cherubic Ventures.

Others are trying to engage and mitigate the damage to their existing portfolio companies through virtual conference calls. Sequoia China is planning to organize two investment sessions for early-stage startups via the conferencing service Zoom. As of Wednesday, investors from more than 50 venture capital houses had signed up.

At a time red-hot sectors from artificial intelligence to ride-hailing and online property are reeling, even those benefiting from a short-term spike in orders -- such as online grocery delivery firms -- are wary of longer-term fallout. 58 Home, the maid and home-maintenance service owned by a Chinese Craigslist equivalent, is said to have delayed its planned U.S. initial public offering after the coronavirus outbreak crippled customer demand. Others such as Uber-backed Didi Chuxing or rental startup Danke may begin to suffer as the capital winter drags on.

“It’s going to be a tremendous challenge for a lot of startups,” said Wang Jun, chief financial officer for fresh produce delivery firm Missfresh. “It’s winter time for capital flow, and companies need to produce blood on their own to become cash-positive.”

To contact the editors responsible for this story: Candice Zachariahs at czachariahs2@bloomberg.net, ;Peter Elstrom at pelstrom@bloomberg.net, Edwin Chan, Jonas Bergman