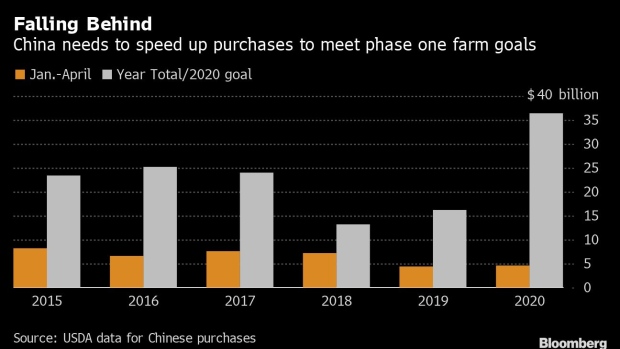 A gantry crane loads a shipping container onto a tractor-trailer truck at the Yangshan Deepwater Port in Shanghai, China, on Monday, March 23, 2020. China's government is talking up the prospects for a rapid economic rebound from the coronavirus, even as the global economy sees further lockdowns to curb the spreading disease. Photographer: Qilai Shen/Bloomberg , Bloomberg

China wants international shippers of meat and soybeans to sign a document attesting their cargoes meet safety standards to ensure they aren’t contaminated with the novel coronavirus. That’s a step many American exporters have so far been reluctant to take for fear of liability, with Tyson Foods Inc. being the first to confirm it’s signed the certificate.

The new demands from China could end up being an impediment to shipments, further delaying the $36.5 billion in farm purchases the Asian nation pledged under the phase one trade deal.

The move comes even as the world’s major public health authorities say the virus isn’t foodborne, raising questions over why China is taking the action. It could also act as a non-tariff trade barrier, a tactic the Asian country has applied in the past with everything from American corn cargoes to Canadian canola.

“I believe this is simply a buyer seeking leverage,” said Chris Robinson, managing director of agriculture and commodities at TJM Institutional Services in Chicago. “They were notorious in the past for canceling shipments for various ‘infractions,’” he said referring to China.

On Sunday, China suspended poultry imports from a Tyson Foods plant where hundreds of employees tested positive for Covid-19, stoking concerns over the broader implications for U.S. and global meat exports. If shippers don’t sign the new affidavits, they could be subject to more bans.

This comes just after China signaled last week it was getting ready to accelerate purchases of American farm goods to comply with the trade deal following recent talks with U.S. officials in Hawaii. Donald Trump has touted the deal as being a big boost to farmers, a key part of his base as he seeks re-election in November.

China’s latest actions could just be the country “stirring the pot” ahead of the U.S. presidential elections in November, Robinson said.

Traders are already on edge after a Trump official on Monday raised questions about the deal before the president himself said the agreement was “fully intact.” Rhetoric between the two countries has intensified recently. Trump employed a racist slur in referring to the pandemic as the “Kung flu” at a rally over the weekend in Oklahoma and the administration has been criticizing Beijing for saying it would impose contentious new national security legislation on Hong Kong.

Chinese buyers are asking soybean and meat shippers to comply with safety regulations “to ensure that food imported into China is not contaminated with the Covid-19 virus,” according to the declaration seen by Bloomberg. The request was directed at “a wide variety of meats, seafood and other foodstuffs,” the U.S. Meat Export Federation said in a message to members.

For shippers, there are many unknowns, including whether and how cargoes will be subjected to Covid-19 testing and what sanctions could be imposed if China says the shipments carried the virus. So far, U.S. exporters seem to be taking a conservative approach, signaling concerns over signing the document.

Late Tuesday, Tyson confirmed it signed the statement declaring it is complying with Chinese laws and international food-safety standards.

“We are very confident in the safety of our products and have put measures in place that are in full compliance with all applicable requirements, and have signed the certification on that basis,” Tyson said.

Meanwhile, some competitors in rival Brazil including meat giants JBS SA and Marfrig Global Foods have agreed to sign.

China, which so far has only purchased a fraction of the farm goods it promised to buy under the trade deal, has a history of using non-tariff barriers to stifle shipments.

That was the case with its tariff-rate quotas for crops including corn, wheat and rice, which led the U.S. to complain to the World Trade Organization. Genetically-modified crops have also been a big issue. In 2013, China rejected several cargoes of corn and distillers dried grain from the U.S. due to the presence of a GMO variety.

How Can I Get It? The Evidence on Virus Transmission: QuickTake

China’s latest moves come after a new coronavirus outbreak in the country had been blamed on imported salmon. Fears over whether food can transmit viruses had led salmon to be boycotted in the Asian nation, even as the country’s National Health Commission said there was no evidence showing the fish was either the origin or intermediate host for the virus.

There were signs China was starting to back off from its previous stance linking food to virus cases. A customs official at a briefing on Friday said the country was taking the advice of international organizations that there’s a low risk of imported food transmitting the virus, and no food restrictions would be imposed. But this week’s moves have been a quick about face to that.

“China is concerned about its reputation for safe food imports, especially after conceding some key items in the phase one agreement,” said Bevan Everett, a risk management consultant and grains market analyst at INTL FCStone Inc.

The USMEF said in a letter to members that it was seeking additional information from the federal government and industry sources in China, while the U.S. Soybean Export Council said it was seeking clarification from Chinese authorities on how the request applies to soybeans compared with foods that don’t need to be processed before being consumed.

“Exports of soy are not directly handled by humans, limiting the risk of exposure,” said Jim Sutter, USSEC’s chief executive officer. “U.S. soy is transported in bulk via intermodal freight, primarily in sealed railroad cars and barges and then onto cargo ships. Once the soybeans arrive in China they are discharged and processed before being fed to animals, with the oil then being further refined before use.”

It’s still unclear why China is asking for the requirements and whether the move is aimed at restricting trade, since Brazilian shippers were also asked to sign the declaration. The USDA didn’t respond to requests for comment. The National Grain and Feed Association declined to comment.

“This makes about as much sense as requiring China to certify that all the products it ships here are coronavirus free,” said Arlan Suderman, chief commodities economist at INTL FCStone in Kansas City, Missouri.