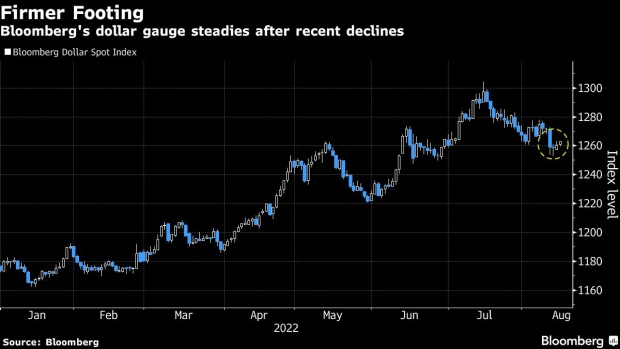 Shoppers on a pedestrian street in Shanghai, China, on Saturday, June 18, 2022. Shanghai will conduct mass testing drives every weekend until the end of July in the latest display of the lengths authorities are going to in order to maintain a zero-tolerance approach to the virus that’s disrupting its economy and leaving it isolated. Photographer: Qilai Shen/Bloomberg , Bloomberg

(Bloomberg) -- China’s worsening economic outlook may supercharge demand for the world’s safest assets, with the dollar likely to be among the top beneficiaries.

That’s according to strategists who reckon investors could double down on long greenback bets against the yuan and other emerging currencies as jitters around a Chinese downturn spur funds to dial back risk-taking.

The dollar surged by more than 1.2% against the offshore renminbi, putting it on course for its biggest one-day gain in three years against the Chinese currency, with the pair topping 6.8 for the first time since May. That helped fuel a broader rally in the greenback, which notched gains against all of its Group-of-10 peers bar the yen, a traditional haven in times of distress.

“The dollar is the place to be as the fallout continues,” said Stephen Miller, an investment consultant at GSFM, a unit of Canada’s CI Financial Corp. “There’s good reason to believe we’ll see more flows into the dollar and US assets as China’s woes deepen.”

The Bloomberg dollar index, which had been grinding lower after peaking in mid-July, jumped 0.7% and was on track for its biggest move up in nearly two weeks. While the gauge is down about 3% from an all-time high in July, the US currency has still strengthened against every Group-of-10 peer this year.

“We maintain our strong dollar call,” Brown Brothers Harriman & Co. said in a note. “Once this risk-off period ends, the dollar should still benefit from the relatively strong US economic outlook.”

China’s offshore yuan slumped after a slew of disappointing economic data and its decline dragged Asian peers lower, with the Thai baht and Indonesian rupiah among the biggest losers.

“If Chinese slowdown risks materialize, we expect it to lead to a softening of Asian currencies such as the won and rupiah,” said Chang Wei Liang, strategist at DBS Bank Ltd. “We are watchful of spillovers, with Asian economies that are dependent on Chinese demand at risk of facing slower export growth.”

Credit Suisse Group AG’s Global Head of FX Strategy Shahab Jalinoos told Bloomberg Television Monday he was still holding on to bets that the dollar would strengthen against the yuan, adding that a wager on the pair hitting 6.95 is still appropriate.

“We thought there might be some kind of a short-term correction in favor of the renminbi once the heat died down a little bit around the geopolitical risk,” he said. “But clearly the economic data there remain even weaker than we were expecting, to be honest.”

To be sure, not everyone is betting on a stronger dollar. Hedge funds turned bearish on the US currency for the first time in a year in a wager its best days may be over.

Mizuho Bank Ltd. suggested expectations that the Federal Reserve’s policy tightening cycle may end soon was a reason for investors to be pessimistic.

Others warned that calls for a peak in dollar strength may come back to bite.

“The single bright spot in China’s economy is exports, but this will come under pressure as global growth slows,” said Alvin Tan, strategist at RBC Capital Markets in Singapore. “You cannot write off dollar strength in the midst of a global growth slowdown.”