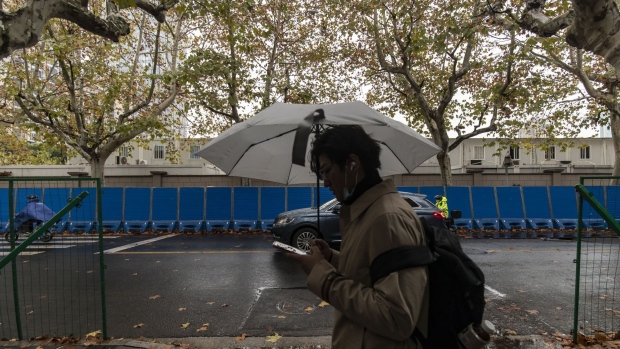 (Bloomberg) -- China’s top official in charge of the fight against Covid-19 said the country’s efforts to combat the virus are entering a new phase with the omicron variant weakening and more Chinese getting vaccinated, a fresh sign that Beijing may be seeking to amend its strategy.

“As the omicron variant becomes less pathogenic, more people get vaccinated and our experience in Covid prevention accumulates, our fight against the pandemic is at a new stage and it comes with new tasks,” outgoing Vice Premier Sun Chunlan said at a meeting with the National Health Commission and health experts in Beijing on Wednesday.

She didn’t use the term “dynamic Covid Zero” -- used to describe China’s quest to quash outbreaks and eliminate Covid -- based on the statement issued after the meeting. At a briefing on Tuesday, officials from bodies including the National Health Commission didn’t use the term either, a departure from previous briefings, and instead encouraged the elderly to get vaccinated.

The country is discussing rolling out a fourth Covid shot, people familiar with the plans told Bloomberg News Wednesday, a sign pressure to reopen is leading to moves for change.

Sun’s remarks appear to be the first official, public acknowledgment in China that the virus is no longer as severe, and come amid other shifts in rhetoric that signal the country is finally looking at moving away from the Covid Zero stance that’s slammed its economy, left it globally isolated and disrupted people’s lives.

Investors responded with optimism, as China’s currency and stocks listed in the US jumped. The Nasdaq Golden Dragon China Index surged nearly 10% at the close in New York, the most since March 16, taking the benchmark’s monthly gain to a record 42% in November. The offshore yuan climbed as much as 1.33% to 7.0457 per dollar.

Charged with China’s healthcare portfolio, Sun has become synonymous with the country’s hardline pandemic approach. If she appeared in a city experiencing an outbreak, it was typically a sign stricter measures like broad lockdowns were coming, a reputation that earned Sun the nickname the “Old Lady of Lockdown” on Chinese social media.

She was sent into Wuhan when the virus first emerged, making her pivotal to the strategy that was then deployed nationwide, and kept China virus-free for much of the past three years. Yet as more contagious variants challenged Covid Zero, she was charged with holding the line, going into Shanghai earlier this year as cases spiraled out of control. Sun also appeared in the southern resort island of Hainan in August, with thousands of tourists were stranded by mass testing efforts and lockdowns.

“Sun’s comments look very significant as she was the tip of the spear when it came to the central government forcing local authorities to faithfully implement the Covid Zero policies,” said Gabriel Wildau, managing director at advisory firm Teneo Holdings LLC in New York. “As a vice premier and former Politburo member, she chooses her words carefully, so her failure to mention ‘dynamic Covid zero’ can’t be accidental.”

It remains to be seen whether the softening tone will mollify protesters, who took to the streets of multiple Chinese cities over the weekend in opposition to the strict Covid policies. Further demonstrations have mostly been thwarted in the past few days by a heavy police presence.

Reopening hopes are buoying Chinese assets across the board, yet the country’s rules are still the most onerous in the world, with targeted lockdowns and testing efforts still leading to disruption. Much of the public remains fearful of the virus.

While Sun made no reference to China reopening or what steps may be taken next, she did emphasize the need for China to accelerate planning for Covid medicines and other medical resources.

Eight top Chinese health experts attended the meeting with Sun, who will leave the Politburo in March due to her age. They provided their suggestions on how to improve China’s 20-point playbook for more targeted Covid containment released earlier this month. Sun urged the officials to continue to optimize pandemic measures.

“Sun’s comment sent the clearest official message so far that omicron has become less of a health concern to the public, and it could be seen as the formal start of changing narratives around Covid,” said Neo Wang, Evercore ISI managing director for China Research.

“But it doesn’t mean the real reopening is imminent,” he added.

The shifting rhetoric comes alongside signs officials are easing some of the more sweeping restrictions.

Authorities in the southern manufacturing hub of Guangzhou lifted lockdowns in most parts of the city Wednesday, including those hit by rioting, partially replacing them with high-risk areas. The designation still confers lockdown-like curbs on a region or neighborhood, but is more targeted in scope.

A similar move was announced in Zhengzhou, home to Apple Inc.’s largest manufacturing site in China, which also saw widespread protests. It lifted broad restrictions, while keeping movement curbs in place in areas with Covid outbreaks. Southwestern metropolis Chongqing, which is experiencing one of China’s most significant outbreaks, said it will gradually lift the lockdown in central urban areas, according to CCTV.

“Top leaders are clearly responding to recent protests,” Wildau of Teneo said of Sun’s remarks. “The challenge for the Communist Party is to minimize the perception that street protests can sway President Xi Jinping and the central leadership from its convictions, which would risk emboldening future protests--not just on Covid but potentially other issues as well.”

The US has been increasingly vocal in recent days about Beijing’s approach to the pandemic and to the protests it spawned.

“China needs to find a new way of confronting Covid infections that addresses both health concerns and ‘the needs of people’,” Secretary of State Antony Blinken said.

The Covid Zero policy “we’ve seen in China is not something that we would do,” Blinken said in an interview with Andrea Mitchell on MSNBC. “China has to figure out a way forward on dealing with Covid, a way forward that answers the health needs but also answers the needs of people. We can’t address that for them.”

US Offers Muted Response on China Protests After Biden-Xi Talks

On Monday, John Kirby, spokesman for the White House National Security Council, told reporters that Biden has been briefed on the demonstrations and US officials were “going to watch this closely.” He didn’t directly criticize Xi or the Chinese government for its handling of protests.

--With assistance from Crystal Chui and Josh Wingrove.