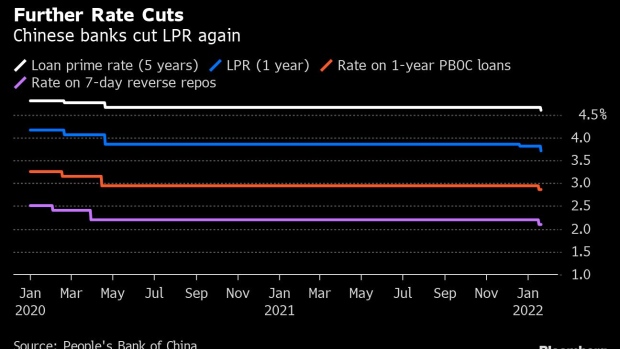 The People's Bank of China (PBOC) in Beijing, China, on Monday, Dec. 13, 2021. Economists predict China will start adding fiscal stimulus in early 2022 after the country’s top officials said their key goals for the coming year include counteracting growth pressures and stabilizing the economy. , Bloomberg

(Bloomberg) -- China’s central bank will further ease monetary policy in the first half of 2022 to stave off headwinds and ensure economic stability, according to a Bloomberg survey of economists.

The People’s Bank of China is expected to lower the amount of money banks have to keep in reserve in the first quarter of this year, bringing down the ratio for major banks to 11%. Major policy interest rates -- the one-year medium-term lending facility rate, one-year loan prime rate, and seven-day reverse repurchase rate, will likely be reduced by 10 basis points each in the second quarter, according to economists surveyed by Bloomberg.

China’s economic growth slowed to 4% in the final three months of last year, and the government and central bank have made clear there will be more action in 2022 to support expansion and stabilize the economy. The central bank cut borrowing costs earlier this week, with banks following the move Thursday by reducing the interest rate on one-year and five-year loans.

“The PBOC is going to ease monetary policy more proactively, that means it will not wait until the GDP data shows weakness of the economy.” said Iris Pang, chief China economist at ING Bank in Hong Kong. “Fiscal spending on infrastructure investments are likely to speed up, which will give GDP growth a boost.”

Other major points in the survey: