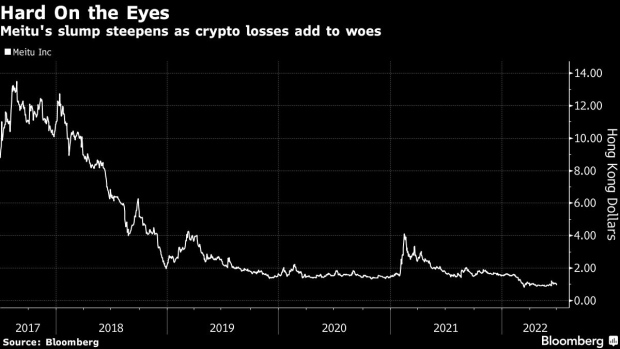 (Bloomberg) -- Shares of Meitu Inc. extended their decline into a fourth day after the beauty-app developer disclosed that it expects first-half losses to widen due to soured cryptocurrency bets.

The Xiamen, Fujian-based firm’s stock tumbled as much as 8.7% in Hong Kong, the most in over two weeks, after saying it expects impairment from Bitcoin and Ether holdings to triple from a year ago. The loss was disclosed in an exchange filing Sunday, and the company is expected to publish first-half results in August.

The photo touch-up app maker was the first major firm in China to invest in cryptocurrencies, announcing in March 2021 that it made initial trades worth $40 million. Investments in Bitcoin and Ether grew to about $100 million in the following months as the company said that the assets could help diversify its portfolio.

Crypto’s stellar rise in recent years hit an abrupt pause this year after a hawkish Federal Reserve and increased regulatory scrutiny sent prices tumbling. Ethereum’s Ether has plunged over 70% so far this year after surging 400% in 2021, while Bitcoin is down nearly 60%.

Meitu has seen increased competition from firms including ByteDance Ltd. and Xiaomi Corp. in recent years. Total monthly active users for Meitu slipped 12% in 2021, and the firm now trades just over 10% of its debut price. It has yet to turn a profit after its notable initial public offering nearly six years ago. Shares are down nearly 40% this year.

Losses for the first half are expected to reach as much as 349.9 million yuan ($52 million), compared with the $45.6 million crypto impairment, which the firm cites as the primary reason for the worsening earnings.