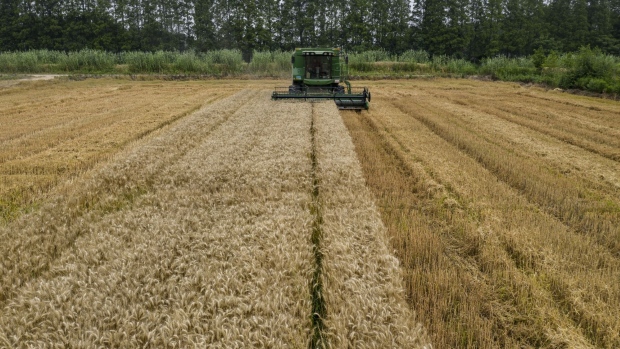 A harvester collects wheat from a field before it will be turned to rice paddies on Chongming Island, in Shanghai, China, on Thursday, June 2, 2022. With the world facing mounting food insecurity because of shortages and soaring costs, governments will be watching rice prices for any sign that political unrest is about to erupt. Photographer: Qilai Shen/Bloomberg , Bloomberg

(Bloomberg) -- As China’s property slump persists, one developer is trying to entice farmers to buy homes by accepting their crops as payment.

Central China Real Estate Ltd. is offering to pay farmers as much as 160,000 yuan ($24,000) for their wheat to offset down payments for homes in its River Mansion residential project in Shangqiu, a city in Henan province, according to a Monday marketing post. Weeks ago, it offered to accept garlic from growers looking to buy homes in another project in Kaifeng city.

The move reflects how far some developers are willing to go to attract wary homebuyers as the economy slows and the industry endures a crippling cash crunch. Central China, the country’s 37th-largest builder, recently sought state support when its parent company agreed to sell a stake to the provincial government.

Its perk to farmers appears aggressive. Central China was offering to buy wheat at 4 yuan a kilogram, higher than the record 3-3.1 yuan that China’s state stockpiling company was purchasing the grain for earlier this month.

Similarly for garlic, Central China offered to pay 10 yuan a kilogram last month. That’s higher than the 6.92 yuan wholesale price as of June 10, according to weekly data released by the commerce ministry.