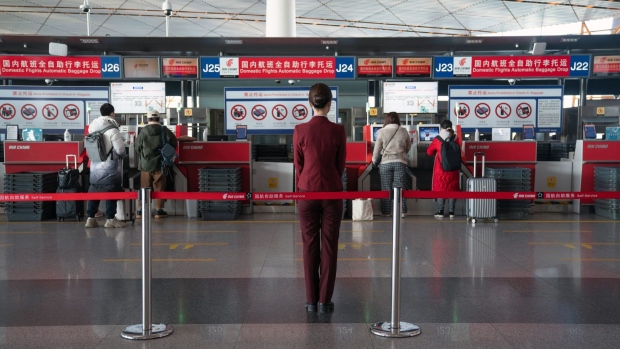 (Bloomberg) -- Lunar New Year is usually a bonanza for Chinese airlines criss-crossing the country fully loaded with passengers. Not this year though, after the government took the rare step of encouraging people to stay at home as it tries to stamp out the coronavirus.

Chunyun, as the Lunar New Year travel season in China is known, is regarded as the world’s biggest annual human migration and can account for as much as a quarter of airlines’ annual profits, according to BloombergNEF analyst Luxi Hong.

The holiday this year falls on Feb. 11-17, but the travel period in China started in late January and runs to March. On Jan. 28, passenger traffic was 71% lower than the first official travel day in 2020, according to the Civil Aviation Authority of China. Ticket bookings for trains, normally packed, are almost 60% lower than usual, the railway authority said.

Like so many others in the country of 1.4 billion people, Beijing resident Jack Zhang isn’t going anywhere. It’s a big decision for those who typically return home to see friends and family at this time of year, though there is one positive.

“It is difficult to adjust to the change of plan, but luckily the bright side is that I don’t need to go for any blind dates my parents tend to put me on during the holiday,” he said. “I don’t see any better and safer option than staying put.”

About 10% of flights have been canceled over the coming fortnight, according to a BNEF report dated Feb. 3, which said China Southern Airlines Co. appears most affected with almost one-third of flights scrapped.

This will be the first time Zhang, 27, has spent the holiday away from his parents, who live in the southern province of Guangxi. The accountant was put off by the testing and tracing requirements and subsequent limits on activities for people coming into Beijing.

For now, airlines are offering dirt-cheap fares to stoke some demand, despite the general aversion to travel. Tickets for a two-hour Hainan Airlines flight from Beijing to Hangzhou on Feb. 12 have been available on travel website Ctrip.com for as little as 100 yuan ($15). That’s a third of the cost of a roast duck at popular restaurant chain Da Dong. A second-class fare on the high-speed train between the two cities is six times more expensive.