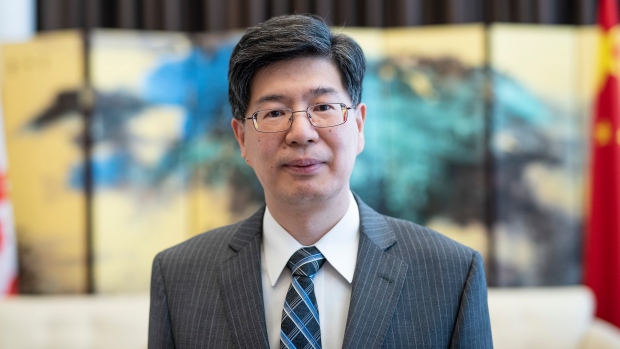 Ambassador of China to Canada Cong Peiwu is shown at the Embassy of China in Ottawa, on Thursday, Feb. 6, 2020. , The Canadian Press

OTTAWA -- China's envoy to Ottawa offered glowing praise Thursday for Canada's help in combating the outbreak of the novel coronavirus and suggested that might useful in repairing the diplomatic rift between the two countries.

"Anything that your side has done and will be doing in the next few weeks in our fight against the disease, of course, that's much appreciated, and that's good," Ambassador Cong Peiwu told The Canadian Press in an exclusive interview.

He said the two countries must "take measures to address the problems in the bilateral relationship so that we can remove the obstacle and move the relationship back on track."

Without naming names, Cong acknowledged that he was referring to the turmoil surrounding the arrests of Huawei executive Meng Wanzhou by Canada, and China's imprisonment of Michael Kovrig and Michael Spavor.

Neither Kovrig nor Spavor has seen a lawyer or been permitted visits from their families, while Meng has been released on bail and is living in a luxurious Vancouver home while her extradition hearing continues.

China's government has angrily denounced the arrest of Meng as unlawful and repeatedly told Canada to release her before any progress can be made on repairing relations. The Trudeau government calls the detention of the "two Michaels" arbitrary and says it is following the rule of law and not interfering in the Meng court case.

"Our position has been clear and consistent. So, the Canadian side is fully aware of our position. So hopefully you will address our concern," said Cong. "The competent parties are handling that."

Cong was speaking one day after Canada's ambassador to China, Dominic Barton, told the special House of Commons committee on Canada-China relations that "the chill is real" in Sino-Canadian relations, and he's doing everything he can to thaw it.

Barton described his first diplomatic interaction in China last fall as rife with anger on both sides. He said his top priority is freeing Kovrig and Spavor and gaining clemency for a third Canadian, Robert Schellenberg, who faces the death penalty for drug smuggling.

Barton said he has not hesitated to raise concerns about China's human rights records with his counterparts, including the incarceration of an estimated one million ethnic Uighur Muslims in China's western Xinjiang region.

Cong declined to comment specifically on Barton's more than two hours of testimony that also included praise for China's handling of the coronavirus outbreak. Cong said he agreed with Barton's assessment that more "people-to-people" ties in business, education and tourism were key to building strong long-term relations.

But he took issue with the committee criticizing China on human rights.

"We are concerned about some remarks" that contained misleading information about China, he said.

"The special committee is still in its very early stage. So, we do hope that the committee will become a platform for people here in Canada to have a better understanding, a more objective understanding of China," said Cong.

He said the Chinese people "have the best say" on human rights issues within the country.

Cong praised the co-operation between Canada and China on battling the outbreak and said his country's top priority has been ensuring the safety of Chinese people and all foreign nationals, including Canada's. The disease started in the city of Wuhan and has infected more than 28,200 people across the globe, killing more than 560.

"We like to co-ordinate with the Canadian side because we want to make sure it's an international campaign against the disease. From the very beginning we have adopted an attitude of being open and transparent to the outside. So we isolated the virus, we sequenced the genome of the virus and we shared the information with the outside, promptly," Cong said.

"Canada has adopted a fairly objective reading of the situation, and it has taken the advice of the WHO not to impose unnecessary trade and travel restrictions. So that's good."

Cong said he met Wednesday with senior officials from the National Research Council, and was impressed by Canada's scientific expertise gained from battling the outbreak of the SARS virus almost 20 years ago.

Cong said he appreciates Canada's support against anti-Chinese sentiments about the outbreak, including a statement by Prime Minister Justin Trudeau denouncing discrimination based on fear.

"We are glad to see that here more and more people are standing up to say no to that kind of remark."

Cong said he's conscious of China's image in Canada and wants to build that up. He also took a more conciliatory tone than his predecessor in how that ought to be done.

Former Chinese ambassador Lu Shaye told The Canadian Press in 2017 that journalists in this country were harming relations with China by disseminating a negative portrait, and that politicians regularly "bow before media" to talk about human rights.

Cong said he was happy to have the "opportunity" to speak to the media because it has an important role in deepening the ability of the two countries to understand each other.

"That role is very much appreciated."