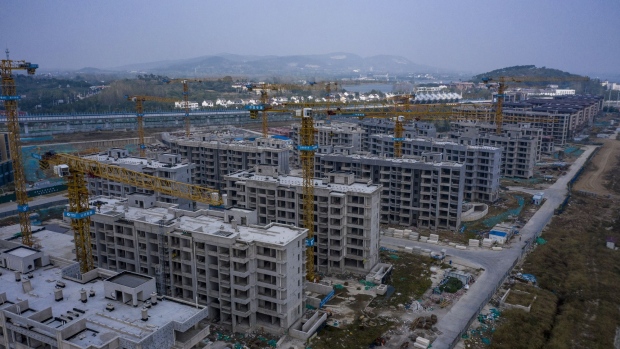 Construction cranes by unfinished buildings at China Evergrande Group's Health Valley development on the outskirts of Nanjing, China, on Friday, Oct. 22, 2021. China Evergrande Group pulled back from the brink of default by paying a bond coupon before Saturday’s deadline, giving the property giant at least another week to come to grips with a debt crisis that has rattled investor confidence in the world’s second-largest economy. Photographer: Qilai Shen/Bloomberg , Bloomberg

The Hong Kong firm, led by Chief Executive Officer Chan Hoi-wan, sold about 270 million Evergrande shares since its last disclosure on Oct. 6, lowering its stake to 2.36% as of Friday, according to a company filing late Tuesday. It revised its expected loss if it got rid of all of its holding to HK$10.6 billion ($1.4 billion) from HK$10.4 billion last month.

Chinese Estates and Chan spent years helping Hui Ka Yan raise cash for his empire and at one point had an Evergrande stake of almost 9%. But as the developer’s woes worsened, Hui’s backers began heading for the exit and started offloading their holdings in August. Since then, the Hong Kong firm offered to go private after its shares slumped as much as 51% in about seven months.

Solar Bright, a British Virgin Islands company ultimately owned by Chan, is making the offer to take Chinese Estates private. The company will let investors cast their vote at a meeting on Dec. 17, and it expects a withdrawal from the Hong Kong stock exchange on Jan. 13 if the proposal goes through, according to the filing.

Chan, the wife of tycoon Joseph Lau and Chinese Estates’ CEO since February, controls 75% of the company with her family. The Lau clan has a net worth estimated at $6.8 billion, down 11% this year, according to the Bloomberg Billionaires Index.