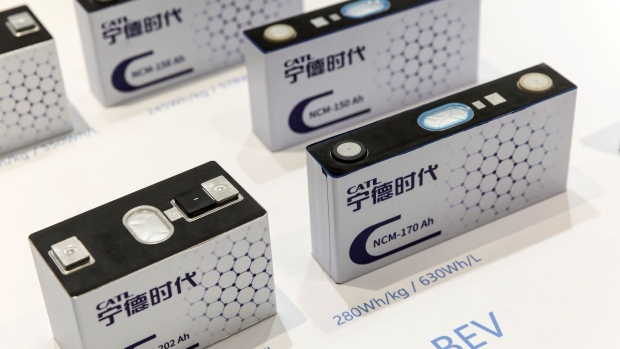 Vehicle batteries sit on display at the Contemporary Amperex Technology Co. (CATL) headquarters in Ningde, Fujian Province, China, on Wednesday, June 3, 2020. CATL's battery products are in the vehicles of almost every major global auto brand, and starting this month they'll also power electric cars manufactured by Tesla at its factory on the outskirts of Shanghai. , Bloomberg

(Bloomberg) -- Logistics companies in Japan, striving to cut costs and make the most out of the pandemic-inspired online shopping boom, are finding an unlikely white knight in Chinese electric-vehicle manufacturers, whose vans make last-mile deliveries not only cheaper, but cleaner as well.

Tokyo’s SBS Holdings Inc., a listed logistics company that offers deliveries, recently struck a deal to buy 2,000 light EV trucks over five years from Japanese EV startup folofly. The cars will be made by a unit of Dongfeng Motor Group Co. as well as other Chinese automakers. Sagawa Express Co.. meanwhile, will utilize 7,200 low-priced electric minivans made by Guangxi Automobile Group Co.

Like most places around the world, online commerce has soared in Japan during Covid as people order everything from food to clothing and electronic gadgets right to their doorstep. Those increased sales are pushing up logistics companies’ carbon footprints. Yet Japan has pledged to cut emissions almost 50% relative to 2013 levels by 2030. To meet that target, 90% of vehicles sold in the nation by that year will need to be battery-electric ones, according to McKinsey & Co.

SBS plans to eventually have a fleet of some 10,000 commercial EV vans that it can use for e-commerce deliveries. The small trucks can run for about 200 kilometers on a single charge and cost around 3.8 million yen ($33,000).

“The range isn’t a huge issue for last-mile deliveries,” said Akira Miyahara, a manager at SBS Sokuhai Support, SBS Holdings’ rapid-delivery unit. While there’s a question mark over how the Chinese vehicles may perform after three or four years, for now, after 12 hours overnight on the charger, there’s no problem.

Although Japan isn’t currently a huge market for electric vehicles -- EV penetration runs at just 1% versus 30% in some cities in China -- Chinese automakers sense an opportunity. BYD Co., which counts Warren Buffett as a backer, already commands around 70% of Japan’s pure electric bus market and aims to have 4,000 such buses running in the country by 2030.

“Japan is well established in the automotive industry due to its reputation as a quality-oriented market, so entering the Japanese market is an important step,” a BYD Shenzhen-based spokesperson said. “BYD Japan will continuously promote the electrification of transportation to accelerate the realization of carbon neutrality.”

Thanks to Chinese government incentives and subsidies, the average price of electric cars has dropped in the world’s biggest car market, while it’s risen in Europe and the U.S. An August report from JATO Dynamics, a London-headquartered global supplier of automotive business intelligence, found that consumers in China can buy a brand new EV for as little as $4,200. The price in Europe jumps to at least $17,880 and again to $28,170 in the U.S.

“If Japanese automakers don’t do anything, China will take over the industry,” SBS Holdings’ Kamata said.

Cenntro Chief Executive Officer Peter Wang sees a bright future for home delivery in the nation due to Japan’s aging society. The company is even planning an assembly plant, potentially in Fukushima, to locally produce EVs and export some of them to Southeast Asia, he said.

“EVs are still a cheaper option than hydrogen” for light-duty trucks, Wang said, with reference to the fact that Toyota Motor Corp., for example, is also exploring hydrogen as a future clean-car fuel. “They’re convenient, easy to use, easy to fix, easy to charge. I’ve talked to a lot of fleet managers in Japan and they couldn’t find the proper vehicle to do it.”

Some observers worry that Japan’s nascent electric-car industry could face a similar crisis to that which befell its home-appliance sector. After dominating the world in the 1980s and 1990s, brands like Panasonic, Sony, Toshiba and Sharp lost out to cheaper Chinese alternatives.

“If Japanese companies just stick to producing cars, foreign companies will come in,” said Hiroyasu Koma, CEO of folofly, the company working with SBS and Dongfeng Motor on the former’s fleet-electrification strategy.

Toyota, the world’s biggest carmaker, still has the ability to turn things around, particularly if it focuses on making high-performing solid-state batteries, according to Takeshi Miyao, an analyst at Carnorama. “Chinese EV makers are at the fore when it comes to prices, but you never know if they’ll still be leaders in three years time,” he said.

And Japanese truckmakers are beginning to fight back. Isuzu Motors Ltd. will start mass producing EV trucks in 2022 while Toyota unit Hino Motors Ltd. plans to sell the mini EV Dutro Z early this summer. Logistics company Yamato Holdings Co. will use two Hino EVs through May and track to what degree CO2 emissions are reduced.

But with Japanese EV trucks expected to cost about three times as much as diesel trucks, logistics companies may struggle to buy them, according to Kamata.