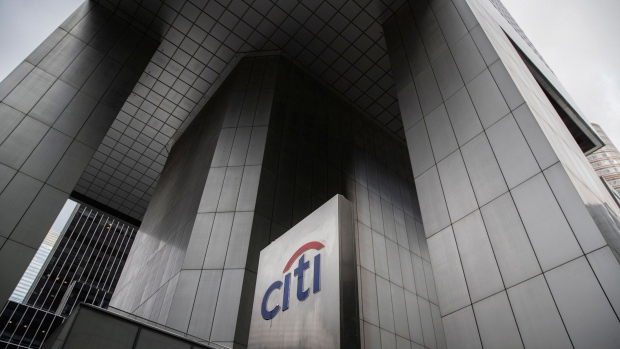 Citigroup in New York, U.S., on Friday, Jan. 7, 2022. Citigroup Inc. was the first major Wall Street bank to impose a strict Covid-19 vaccine mandate: Get a shot or face termination. With its deadline fast approaching, the company is preparing for action. , Photographer: Victor J. Blue/Bloomberg

(Bloomberg) -- Citigroup Inc. eliminated dozens of jobs across its investment banking division this week, as a dealmaking slump continues to weigh on Wall Street’s biggest banks.

The cuts impacted staffers globally within the investment-banking group, which includes its capital-markets arms, according to people with knowledge of the matter who asked not to be identified because the information is private.

A spokesperson for New York-based Citigroup declined to comment.

Wall Street’s lenders regularly cull underperformers ahead of the annual bonus season that comes at the start of the year. Still, the move marks a reversal for Citigroup, which has been adding talent as it seeks to boost its position in certain sectors, including health care and technology.

US banks have been hurt by the dramatic slowdown in investment banking as the volatility that spurred gains for trading also weighed on capital markets and asset management. Investment-banking fees at Citigroup, led by Chief Executive Officer Jane Fraser, plummeted 64% in the third quarter.

Citigroup Chief Financial Officer Mark Mason warned last month that the company continues to keep a close eye on expenses in the investment-banking division, though he reiterated the firm’s commitment to the overall franchise.

“We obviously will look at how the wallet continues to evolve and are very disciplined as it relates to expenses,” Mason told journalists on a conference call last month, noting that Citigroup is “very focused on ensuring that we have productive talent in our business.”

Rivals also have been cutting positions. In September, Goldman Sachs Group Inc. started its biggest round of job cuts since the start of the pandemic, while Royal Bank of Canada and Bank of Montreal have also reduced their headcount recently.