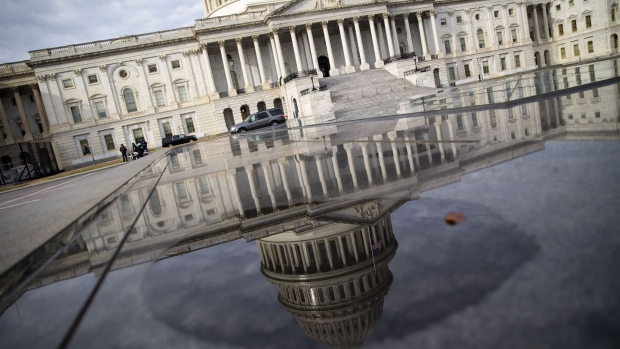 The U.S. Capitol building is reflected in a pool in Washington, D.C. Photographer: Al Drago/Bloomberg , Bloomberg

(Bloomberg) -- With congressional talks surrounding a stimulus program at an impasse, Citigroup Inc. suggests state and local governments should seize on rock-bottom interest rates to do it on their own.

“The populations are hurting right now,” Rai said in an interview. “There has to be some level of state stimulus that should happen, given that there is a bottleneck with lawmakers in Congress.”

But that may be a hard sell in statehouses and city halls, where officials are facing unprecedented budget challenges as the coronavirus pandemic slashes their tax collections. Governors and mayors have been pleading with lawmakers in Washington for aid, though talks on another relief package so far have failed, and they would likely be hesitant to run up debt just as their finances crumble.

Still, municipal bond yields are at their lowest point in nearly 70 years. That’s providing an opportunity for state and local governments to tap markets at ultra-low borrowing costs, according to Citigroup, the second-biggest underwriter of municipal debt.

”There has never been a greater need to issue social bonds, and yields have never been lower,” Rai said. “They shouldn’t miss out on this window of opportunity.”