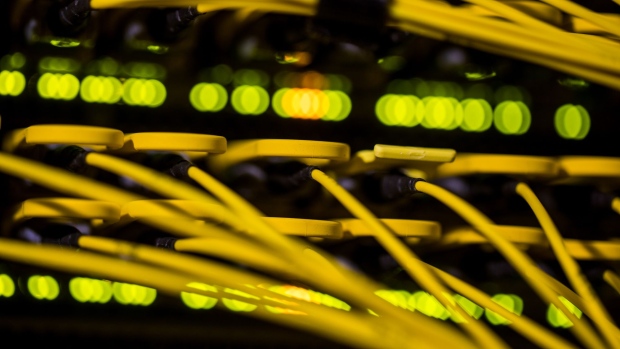 Fiber optic cables feed into a switch inside a communications room at an office in London, U.K., on Monday, May 21, 2018. The Department of Culture, Media and Sport will work with the Home Office to publish a white paper later this year setting out legislation, according to a statement, which will also seek to force tech giants to reveal how they target abusive and illegal online material posted by users. Photographer: Jason Alden/Bloomberg , Bloomberg

(Bloomberg) -- Citrix Systems Inc., after a sharp drop in its share price this year, is working with advisers and is once again weighing whether to sell itself, according to people familiar with the matter. The company’s shares jumped as much as 6.8% after the close of regular trading.

The workplace software maker plans to gauge the interest of potential buyers over the next few weeks, the people said, asking not to be identified because the matter is private. A decision hasn’t been made on whether to pursue a sale and Citrix might remain a standalone entity, they said.

A representative for Citrix, based in Fort Lauderdale, Florida, didn’t immediately respond to a request for comment.

Citrix shares have fallen almost 16% year to date through Tuesday’s close, giving the company a market value of $13.6 billion. The share declines included their sharpest drop since 2008 after delivering second-quarter results in July that fell short of analysts’ expectations.

The move comes after activist investor Elliott Investment Management took a 10% stake in the workplace software maker, a person familiar with the matter said earlier this week.

It’s the second time Elliott has been involved with Citrix. Elliott disclosed a stake in the company in 2015, arguing at the time that it was suffering from poor execution and management and needed to simplify its business after a misguided buying spree. As part of a settlement that year, Jesse Cohn, an Elliott partner, joined the Citrix board, where he remained until 2020.

Citrix previously tried to sell itself in 2017 but discussions with potential buyers, including Bain Capital and Thoma Bravo, stalled over valuation, people familiar with the matter said at the time.