Beijing’s municipal government has proposed an investment in Didi Global Inc. that would give state-run firms control of the world’s largest ride-hailing company, according to people familiar with the matter.

Under the preliminary proposal, Shouqi Group -- part of the influential Beijing Tourism Group -- and other firms based in the capital would acquire a stake in Didi, the people said, asking not to be identified discussing private information. Scenarios under consideration include the consortium taking a so-called “golden share” with veto power and a board seat, they added.

Didi’s shares spiked 8 per cent before paring gains to about 3 per cent higher in pre-market trading in New York. It’s unclear how large a stake the city is eyeing and whether its proposal will be approved by senior government officials. Didi is currently controlled by the management team of co-founder Cheng Wei and President Jean Liu, which received aggregate voting power of 58 per cent after the company’s U.S. initial public offering. SoftBank Group Corp. and Uber Technologies Inc. are Didi’s biggest minority shareholders.

Local governments have traditionally had a big say in the restructuring of companies on their turf, and the envisioned solution dovetails with Xi Jinping’s priorities of redistributing wealth and curbing the influence of the internet sector. The city’s proposal could entail taking a sizeable slice of Didi or a nominal stake accompanied by a golden share and board seat, the people said. The latter model would be akin to an earlier investment by the government in ByteDance Ltd.’s Chinese unit, which gave the state entity veto-rights over important decisions. 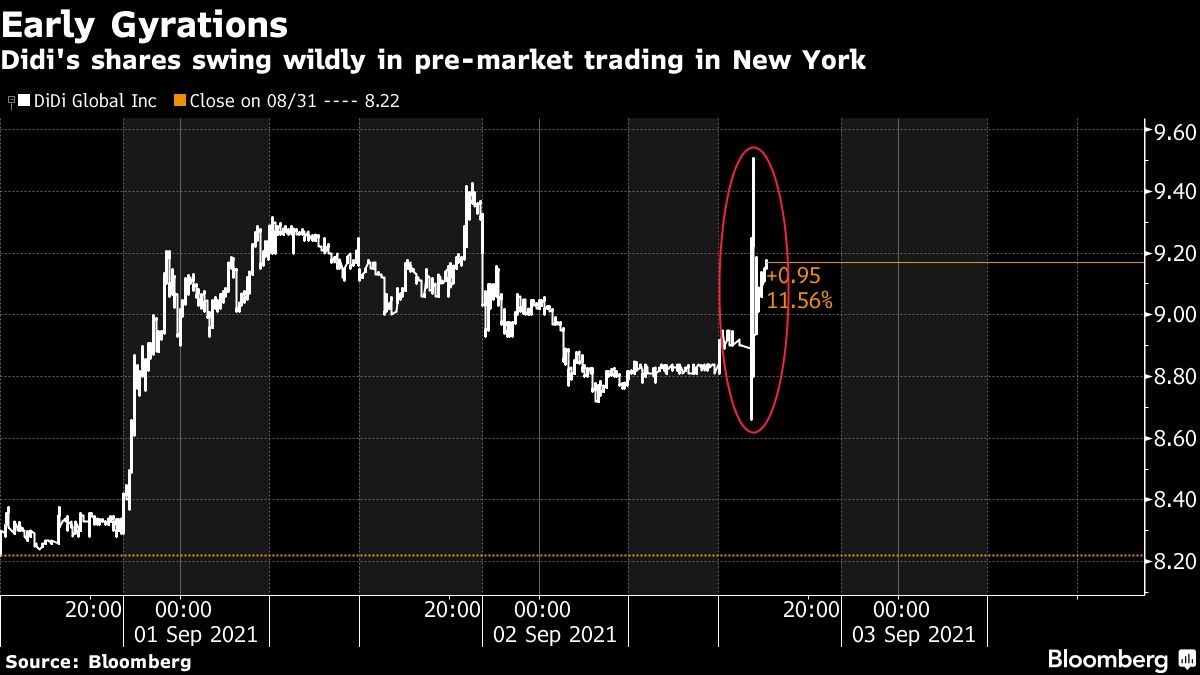 The takeover proposal comes alongside a swath of penalties Xi’s administration is considering for the country’s ride-hailing leader, which debuted in New York in June over the objections of the Cyberspace Administration of China. The internet industry overseer saw that decision as a challenge to the central government’s authority and officials from the CAC, the Ministry of Public Security, the Ministry of State Security and several other agencies initiated an on-site inspection at Didi’s offices in July.

It’s since been ensnared by probes into data security and the way it treats its millions of drivers. Many of the options Beijing is weighing involve re-asserting state control over a company that’s traditionally operated in a legal gray zone, Bloomberg News has reported. They are said to include getting Didi to hand over its troves of data to a third party and a delisting from U.S. bourses.

DiDi’s regulatory turbulence could end if Chinese regulators implement a government plan to invest in the ride-sharing firm, have veto rights over key decisions and levy a harsh fine, as reported by Bloomberg News. DiDi’s IPO proceeds and possible state investment could support its handling of a large fine, while other measures may help ease uncertainty. We still think an exit from most international markets would bolster profitability.

The central thrust of the Beijing government’s proposal is to regain control over one of the city’s largest corporations, particularly data that it hoovers up from hundreds of millions of users daily -- a fount considered vital to the economy and social stability. China’s government has proposed creating a joint venture with internet firms that would oversee that kind of information, a project led by the People’s Bank of China, Bloomberg News has reported.

Shouqi, which in 2015 set up a ride-hailing service known as Shouqi Yueche that now has more than 100 million users nationwide, will play a role in helping operate its larger rival. The company is one of the most important assets of the Beijing Tourism Group, which runs a chain of travel agencies, malls, restaurants and hotels across the capital.

In addition, Chinese regulators are considering severe penalties for Didi, ranging from a fine to the suspension of certain operations, Bloomberg News has reported. Also possible is a forced delisting or withdrawal of Didi’s U.S. shares, although it’s unclear how such an option would play out. A delisting and privatization of Didi remains on the table should the central government green-light the plan envisioned by Beijing’s municipal government, the people said.

Whatever the outcome, Beijing is likely to impose harsher sanctions on Didi than on Alibaba Group Holding Ltd., which swallowed a record US$2.8 billion fine after a months-long antitrust investigation and agreed to initiate measures to protect merchants and customers, Bloomberg News has reported. 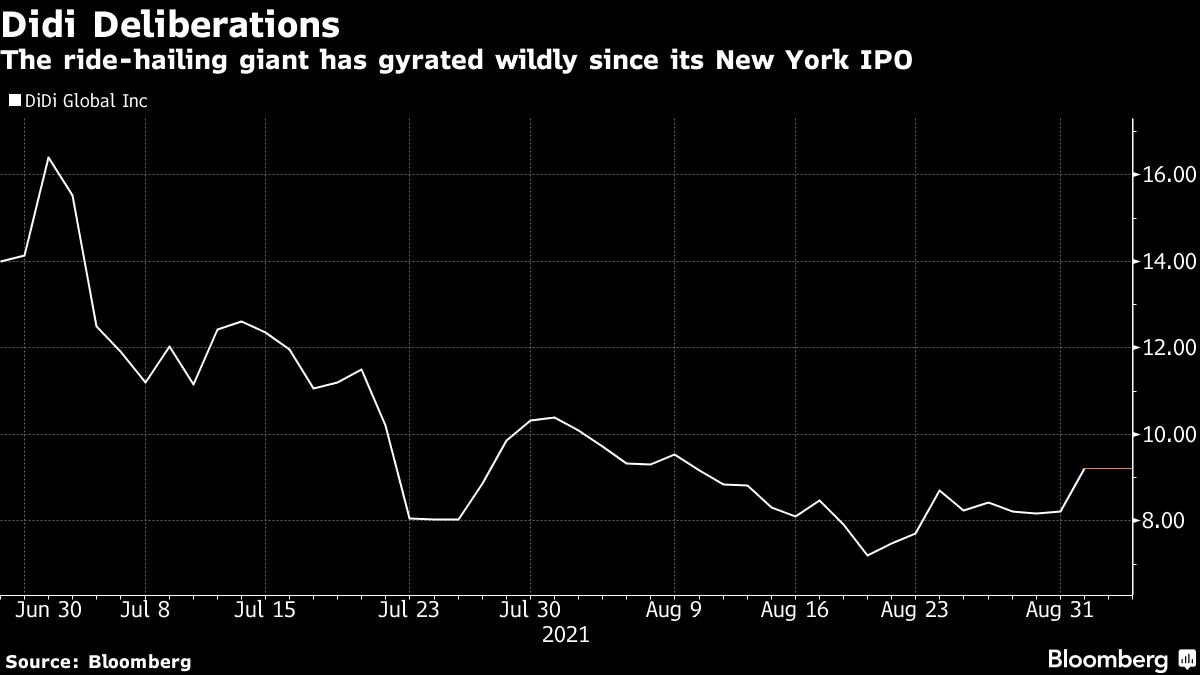 Didi -- once feted for defeating Uber in China -- has now become a test case for a broader Chinese government effort to curb the power of internet titans. Xi’s administration, keen to promote his vision of sharing the wealth or “common prosperity,” has targeted an internet sector that’s accumulated vast wealth by operating on the periphery of the law, minted an unprecedented number of billionaires and enriched a swath of local and foreign investors in the process.

Its controversial June 30 IPO was the trigger for a renewed assault on internet giants that expanded beyond unfair competition in online commerce to encompass everything from private online education to social media, at one point wiping out more than US$1 trillion of market value from Chinese stocks. That campaign is into its 11th month, a roller-coaster ordeal that’s prompting investors to ponder the longer-term ramifications of a crackdown on firms from Jack Ma’s Ant Group Co. and Alibaba to food delivery giant Meituan.

It’s unclear now what lies in store for Didi, which has shed a third of its market value since raising US$4.4 billion via the second-biggest American initial public offering for a Chinese company. The debut -- which followed years of run-ins with regulators after a pair of murders in its network provoked a public backlash -- turned co-founder Cheng into a billionaire and rewarded long-time backers SoftBank, Tiger Global Management and Temasek Holdings Pte.

Didi to this day relies on a large number of technically unlicensed drivers and cars to provide some 25 million daily rides. On Thursday, the transport ministry spooked investors by warning that Didi and its rivals must come up with plans to fix such violations by December -- the latest in a barrage of warnings for sharing economy giants.