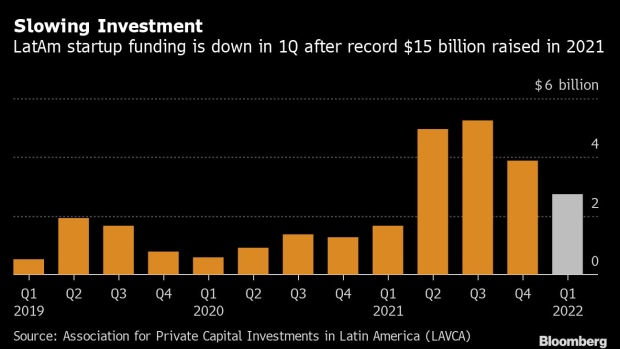 “I’m a huge believer in Latin America,” Claure said at Bloomberg’s New Economy Gateway Latin America event in Panama City. “These last three years have been remarkable, even in these difficult times we have been able to get amazing returns.”

The influential venture capital investor, best known for turning around Sprint and preparing WeWork for its public listing during his time as chief operating officer for SoftBank International Corp, expects companies to flock to the region as geopolitical developments show a supply chain too concentrated in one country is risky. That trend should bring “a lot of capital” to the region, Mexico especially, he said.

Another huge driver of capital should be around the electric vehicle revolution – particularly in Bolivia, Chile and Argentina, which sit on massive reserves of raw materials including lithium needed to produce batteries.

“Just for having the right commodity they have incredible potential,” he said, adding that the price of raw materials overall should remain high for some time.

Claure, 51, left SoftBank in late January after clashing with founder Matsayoshi Son over compensation. He had also advocated for a spinoff of the Latin America investment fund he oversaw for SoftBank.

Rapidly rising interest rates and less “free money” in the global financial system will force companies to adjust, but aren’t reasons to be pessimistic, according to Claure.

The region won’t go back to the “dark ages,” when it got fewer investments than India. Moreover, companies will likely focus on generating profit as the go-go times fade, which means they’ll likely need less capital too. But the core idea behind the investments -- technology driving innovation -- remains intact, he said.

“The next five, ten years will be some of the most exciting,” he said. “Now is going to be the time to do great investments, companies are going to get different valuations and you’re going to be able to ride another great wave.”