Canadian National Railway Co. cut its outlook for profit growth and cash flow for 2022, saying it expects costs to be significantly higher than it previously forecast as the price of fuel soars.

The country’s largest railway said Tuesday it now projects earnings per share growth of 15 per cent to 20 per cent on an adjusted basis; the previous target was 20 per cent. Canadian National’s new outlook for operating ratio -- a key measure of costs as a percentage of revenue -- is 60 per cent, up from 57 per cent.

The Montreal-based company said operating expenses increased 12 per cent in the first quarter, partly because of the spike in fuel prices triggered by Russia’s war in Ukraine. The railway reported adjusted earnings of $1.32, up 7 per cent. Analysts expected $1.38. Revenue was slightly better than estimates.

“Looking ahead, our immediate focus is on restoring CN’s network to its full capacity and running a scheduled railroad with an emphasis on velocity,” new Chief Executive Officer Tracy Robinson said in a statement. “I am confident that we will have a strong year and deliver on our 2022 financial outlook.” 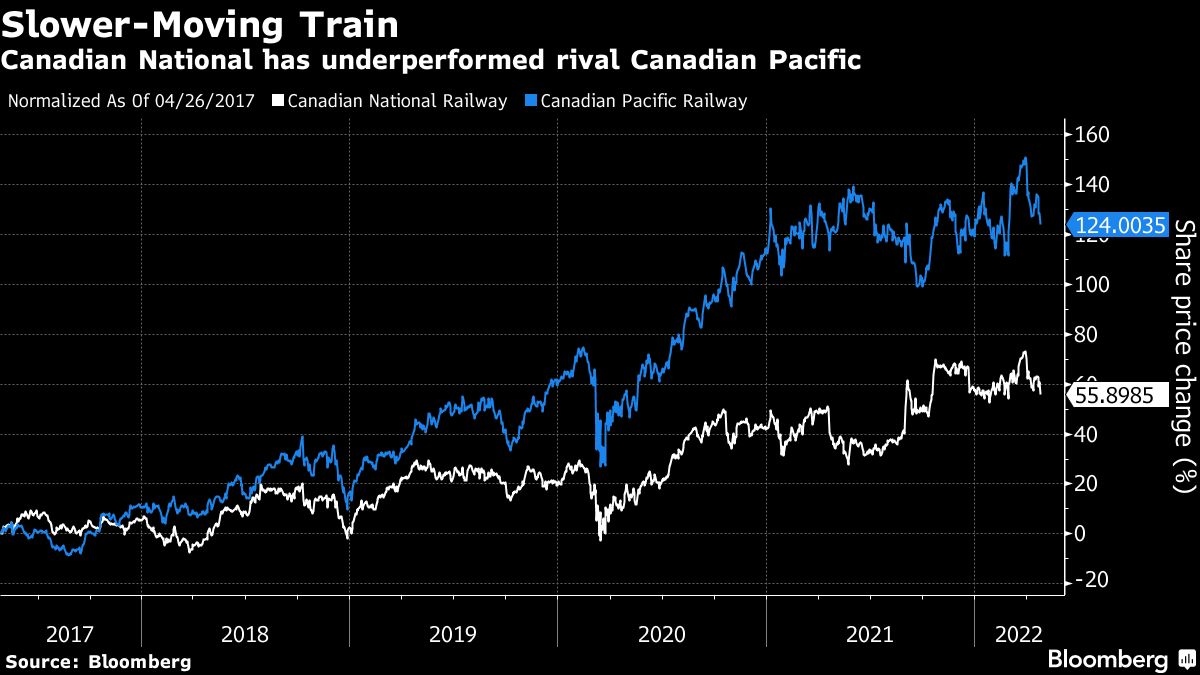 Robinson took the helm of the railroad at the end of February, making her one of the most prominent female executives in corporate Canada and the first woman to run one of its two major railways.

Robinson steps into the CEO role at a time when supply-chain bottlenecks are hampering transport and driving up costs around the world, while China’s COVID-19 lockdowns and the Ukraine war are adding to the logistical challenges of supplying key commodities. A slowing economic backdrop also threatens to undermine Canada’s railways, prompting Raymond James to cut its price targets for both CN and Canadian Pacific Railway Ltd. last week.

Robinson said the railway has a “healthy and interesting pipeline of growth opportunities” but offered few specifics about her strategy, noting that she has been CEO for only 60 days and will share more details as her plans advance.

She did say Canadian National hasn’t performed fully to its capabilities and “we’re putting it behind us” by working on integrating the business and putting a focus on velocity -- the ability to move freight quickly and efficiently.

Canadian National also trimmed its guidance for free cash flow, saying it could come in as low as $3.7 billion (US$2.9 billion) this year versus a previous target of $4 billion.

Volume for most North American railroads was lower in the quarter due to severe weather, supply-chain disruptions and a two-day labor stoppage at Canadian Pacific, according to Bloomberg Intelligence data.

Robinson succeeded Jean-Jacques Ruest as CEO, who stepped down from the top job following a public battle with TCI Fund Management Ltd., run by billionaire Chris Hohn. TCI, which owns more than 5 per cent of Canadian National, argued the railway needed new management to get more efficient and boost a stock price that has significantly underperformed Canadian Pacific over the past five years.