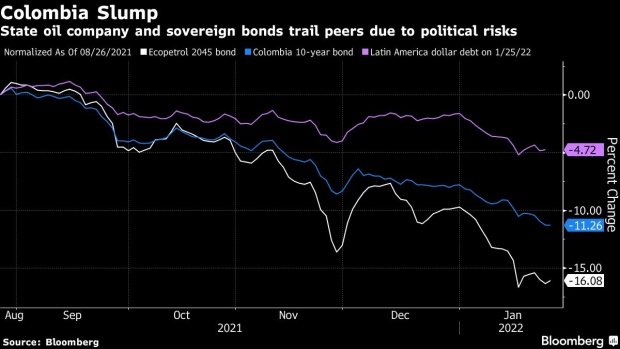 Gustavo Petro, presidential candidate of the Colombia Humana party, speaks to members of media after registering his candidacy at the National Civil Registry in Bogota, Colombia, on Thursday, Jan. 20, 2022. Petro is calling on ideological allies across Latin America and the world to join him in forming a new bloc to lead the economy away from fossil fuels. , Bloomberg

(Bloomberg) -- Gustavo Petro, the front-runner to win Colombia’s presidential election in May, has repeatedly vowed he will halt oil drilling the day he takes office. To some observers, this is campaign bluster that would prove difficult to carry out in a country where oil is the No. 1 export.

But bond investors are taking him very seriously.

Ecopetrol SA’s notes have posted some of the biggest losses among emerging-market oil companies since August, when Petro first mentioned he would end oil exploration. While he still faces a steep path to the presidency with dozens of candidates in the running, his rhetoric is spooking investors used to reliably pro-business administrations.

Ecopetrol’s tumble is one of the clearest signs of the Petro effect that’s swept through Colombian markets, turning local and overseas government securities into laggards four months before the first round of voting. Petro has said he favors replacing the country’s top export with a knowledge- and tourism-based economy, and touted other ideas that he says would favor the poor over entrenched business interests.

“Political noise will incrementally take center stage, as the country faces a potential shift to the left,” Claudio Irigoyen and Christian Gonzalez, strategists at Bank of America, wrote in a report last week.

Overseas bonds sold by Ecopetrol have lost 7% since August, almost twice the average decline for emerging-market oil debt, according to data compiled by Bloomberg.

And yields on government bonds -- both local and hard currency -- have risen to their highest levels since the Covid-19 pandemic sparked a rout in credit markets two years ago. The domestic notes, known as TES, have lost 9.9% over the past four months, the worst performer in Latin America, according to a Bloomberg index. Dollar bonds have also tumbled 10%.

“Petro clearly raises concerns in the market,” said Anupam Damani, a portfolio manager and head of international and emerging market debt at Nuveen. Worries are focused around “how interventionist he’s going to be.”

Stocks have been the lone exception in Colombia. The MSCI Colcap index has risen 13.9% since August, helped by cheap valuations and recent multibillion dollar takeover bids. Even Ecopetrol shares have gained 8%.

A sitting senator and former mayor of Bogota, Petro, 61, advocates for shifting the economic model away from petroleum and coal, which account for nearly half of exports. Continuing to rely on fossil fuels even as the consequences of climate change become ever more apparent would be the “politics of death,” he said in an interview with Bloomberg in January.

Those comments caused a short-term sell-off in the peso, though the currency has overall performed relatively well in the past few months. Petro said he isn’t responsible for the market’s reactions to comments he makes before taking office.

Petro rejects the “left-wing” label some analysts have tagged him with. While left-of-center parties have been gaining ground in Colombia over the past two decades, the country has never elected a leftist president in its modern history.

“The left has not only gained ground in Colombia, but it has also strengthened its position across LatAm over the last couple of years, particularly in Mexico, Argentina, Peru and Chile,” BTG Pactual analysts Daniel Guardiola and Alonso Aramburu wrote in a note to clients. “Expect the market to start factoring in the unpredictability and risk associated with the elections.”

One caveat is that markets in Peru and Chile in particular have staged strong rebounds since the countries elected leftist presidents in the past months, and the same pattern could emerge in Colombia, according to Armando Armenta, an emerging-market strategist at AllianceBernstein.

“Risk premium increases around EM elections as market participants take comments and policy promises made in the heat of the campaign literally,” Armenta wrote in a message. “Once elected, the new administrations face economic and institutional constraints that assuage the worst market fears.”

For now, traders are unlikely to dive into Colombia even amid the tempting valuations, according to Josefina Valdivia, the head of fixed-income research at Credicorp Capital.

Colombia’s bonds “are quite attractive but it’s hard to know if we’ll see strong flows under this context,” Valdivia said.