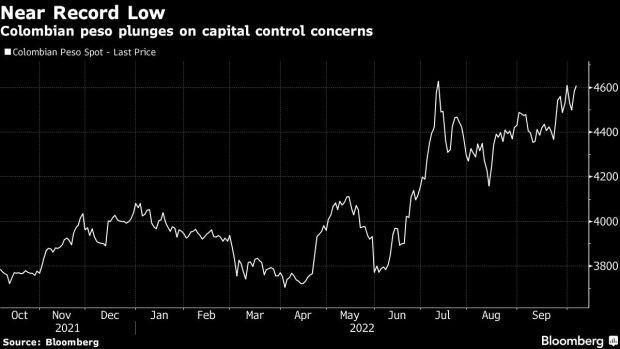 (Bloomberg) -- The Colombian peso weakened and local bonds sold off after President Gustavo Petro weighed a tax on capital outflows.

The currency depreciated 0.7% to 4613.5 per dollar, extending a fall that began on Wednesday.

In a series of tweets Wednesday, the leftist president criticized recent interest rate rises by the Colombian central bank. The bank’s “real intention” with recent monetary tightening is to avoid capital outflows which “can be avoided with a transitory tax on hot money flows” he said.

Petro didn’t elaborate on how such a tax would work, or whether the government is seriously considering it. In an apparent attempt to calm the jittery market, public credit director Jose Roberto Acosta said Thursday that capital controls are “neither necessary nor useful.”

Petro’s pledge to end new oil exploration already had investors on edge. Since being elected in June, the Colombian currency has lost more than 15%, the worst performance in emerging markets after the Argentine peso.

Capital controls would be the responsibility of the independent central bank and not of the government. Even so, Petro’s comments are leading to investor concern and adding to losses in the currency, according to Andres Pardo, chief Latin America macro strategist at XP Investments.

“I don’t see the central bank imposing any such measure,” said Pardo. “But the president’s statements generate uncertainty because they make it clear how he sees economic policy.”

Colombia’s local peso bonds due 2031 also fell, sending the yield above 13% for the first time since July.

After Petro’s tweets, the central bank published five of its own, explaining its reasons for lifting borrowing costs. The tweets, which didn’t mention Petro’s comments, cited strong economic growth and internal demand, as well as higher interest rates overseas among the bank’s reasons.

The bank reiterated its commitment to getting inflation back down to its 3% target, while taking into account that growth is expected to slow. Annual inflation accelerated to 11.4% last month, the highest level since 1999.

Read more: Colombian Inflation Jumps More Than Forecast to Most Since 1999

The bank surprised analysts last week by slowing the pace of rate rises. That, together with wide current account and fiscal deficits is also helping push the peso lower, according to Mario Castro, a strategist at Banco Bilbao Vizcaya Argentaria.

“In general, you have a market perceiving high political risk” in Colombia, Castro said, which was aggravated by Petro’s tweets.

Foreign funds own about a quarter of the nation’s local peso bonds, so the government must be careful not to scare them off, which would push up its financing costs even further, Pardo said.