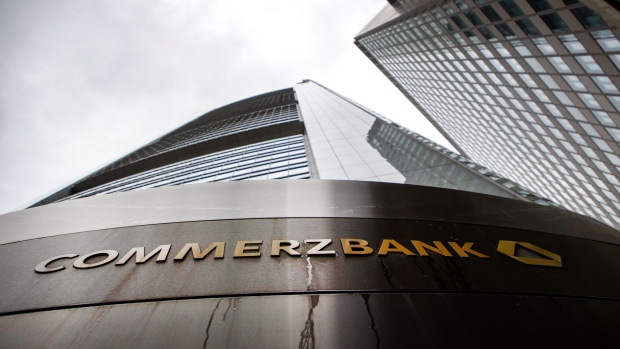 The Commerzbank AG headquarters in the financial district in Frankfurt, Germany, on Friday, Jan. 29, 2021. Germany’s recovery from the coronavirus pandemic will be slower than expected, as extended restrictions hit activity. Photographer: Alex Kraus/Bloomberg , Bloomberg

Revenue soared 35% in the first quarter after the bank joined peers in profiting from strong trading and investment banking conditions. That drove net income to 133 million euros ($161 million), compared with a forecast loss of 53 million euros.

“We started the year with very strong results, and we have achieved a positive net result after restructuring charges,” Chief Financial Officer Bettina Orlopp said in a statement. “The strong securities business made a significant contribution to this result, and this enabled us to largely compensate for the effects arising from the negative interest-rate environment.”

The results are the first overseen by Knof, who joined the lender in January and quickly presented a four-year turnaround plan that’s centered around cutting about a fifth of the lender’s costs and a quarter of its domestic workforce. The bank had previously said that revenue would fall this year as it shrinks its corporate clients unit, and that it will likely post a loss as it sets aside money to pay for the 10,000 job cuts it seeks to carry out by the end of 2024.

Costs for soured loans fell 54% from a year earlier, and the bank said the annual total would likely be in the lower half of its expected range.

Commerzbank last week increased the expected costs of the turnaround plan to slightly over 2 billion euros after an agreement with the lender’s workers council on the job cuts was more expensive than previously anticipated. On Tuesday, the bank unveiled an agreement to outsource its equities trading and research to the French bank Oddo BHF as another element of its strategy.

The corporate clients unit under Michael Kotzbauer is set to shrink this year as Commerzbank pulls out of several countries and severs ties with clients not seen as lucrative enough. Instead, it will focus more strongly on its clients among Germany’s middle-sized companies.