Commodities rose to their highest in almost eight years amid booming investor appetite for everything from oil to corn.

Hedge funds have piled into what’s become the biggest bullish wager on the asset class in at least a decade, a collective bet that government stimulus plus near-zero interest rates will fuel demand, generate inflation and further weaken the U.S. dollar as the economy rebounds from the pandemic.

The Bloomberg Commodity Spot Index, which tracks price movements for 23 raw materials, rose 1.6 per cent on Monday to its highest since March 2013. The gauge has already gained 67 per cent since reaching a four-year low in March.

The day’s gains were helped by copper, which rose above US$9,000 a metric ton for the first time in nine years. Oil also jumped on speculation that global supplies are rapidly tightening, while coffee and sugar advanced.

“Folks who have really ignored commodities for quite a long time are now starting to get positioned,” said Bart Melek, head of commodity strategy at TD Securities. “The implication is that this could go on for a bit. It’s very much a function of expectations of scarcity.” 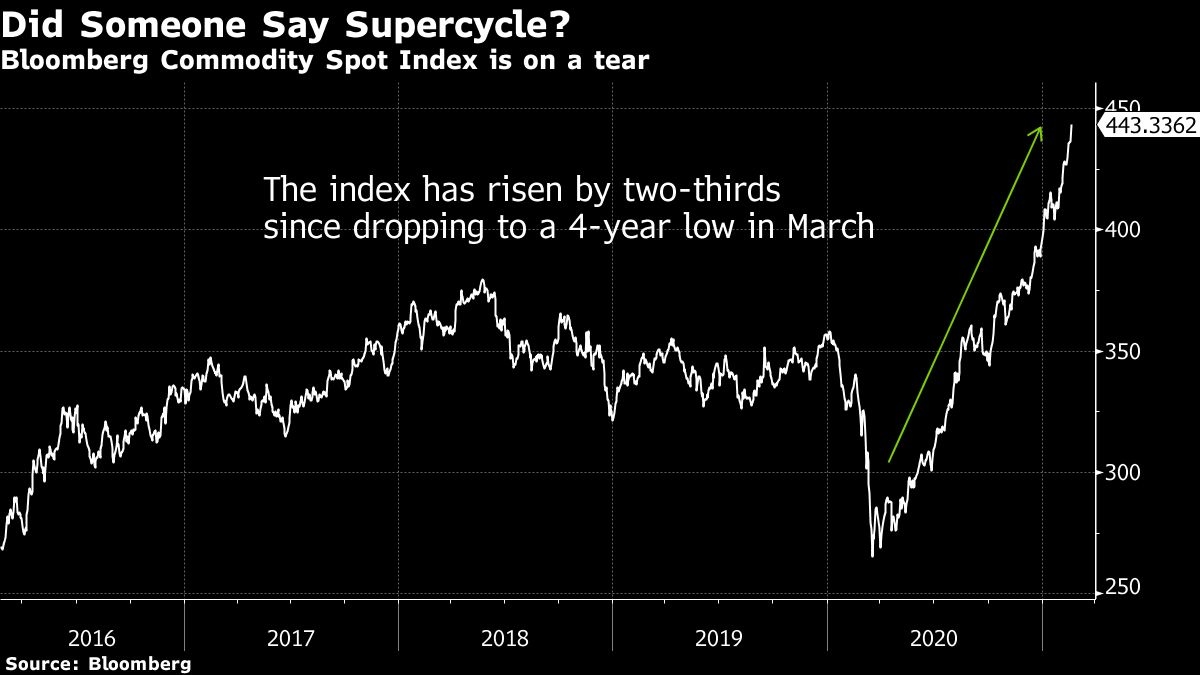 JPMorgan Chase & Co. said earlier this month that commodities appear to have begun a new supercycle -- an extended period during which prices are well above their long-run trend. That echoes similarly comments from others including Goldman Sachs Group Inc. Commodities have seen four comparable cycles over the past 100 years.

The asset class is typically seen as a good hedge against inflation, which has recently become more of a concern among investors. The commodities rally will be a story of a “roaring 20s” post-pandemic economic recovery as well as ultra-loose monetary and fiscal policies, JPMorgan analysts led by Marko Kolanovic said Feb. 10.

Commodities may also jump as an unintended consequence of the fight against climate change, which threatens to constrain oil supplies while boosting demand for metals needed to build renewable energy infrastructure and manufacture batteries and electric vehicles, they said.

Copper is surging amid a broad rally in metals from iron ore to nickel. The bellwether industrial commodity has doubled since a nadir in March, also boosted by rapidly tightening physical markets and prospects for rebounding economic growth.

“The mega-trends that we see playing out around global population growth, the electrification thematic and the energy transition, all of these bode well for commodity demand over the medium-to-long term,” Mike Henry, the chief executive officer of mining giant BHP Group, said last week in a Bloomberg Television interview.

Commodities swings have huge impact on cost of living since they can encompass the price of fuels, power, food and construction projects. They also help shape terms of trade, exchange rates and ultimately the politics of commodity-dependent nations like Canada, Brazil, Chile and Venezuela.