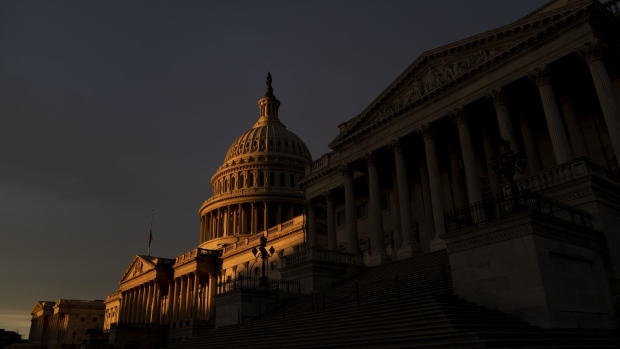 (Bloomberg) -- Republicans and Democrats in Congress moved closer to resolving a partisan impasse over raising the government’s debt ceiling without taking the nation to the brink of default.

House Democrats are tying the debt limit increase to legislation to avoid cuts next month in Medicare reimbursements, farm and other programs. Some key Senate Republicans signaled initial support for the maneuver, which would allow Democrats to address the debt ceiling in the evenly divided chamber with a simple majority, instead of the more than 60 votes needed for most bills in that chamber.

“We will have to see what comes over, but yeah,” Senator John Thune of South Dakota, the chamber’s No. 2 Republican, said when asked if he will vote for it. He added that he believes he could find 10 Republicans to make the plan work.

“We think that this is a perfectly appropriate way to handle this,” he said.

“I would expect to be able to be for it,” said Blunt, a close ally of Senate Minority Leader Mitch McConnell.

If the plan goes through, the debt limit increase could pass Congress by the end of this week, just days ahead of the date which the Treasury said the government may run short of authority to pay its bills. House Speaker Nancy Pelosi sent the legislation to the House Rules Committee, which has scheduled a 1 p.m. meeting to advance the measures to potential floor action later Tuesday.

This approach would tie action on the debt ceiling to stave off nearly 10% in cuts to Medicare payments under the so-called Paygo law set to go into effect on Jan. 1.

The plan involves a bit of procedural gimmickry, as congressional Democrats find themselves searching for a route to avoid the government defaulting on its obligations while Senate Republicans insisted that Democrats would have to deal with the debt limit on their own. Senate Democrats have resisted for months raising the debt ceiling using a multi week budget reconciliation process.

Earlier Tuesday, Senate Majority Leader Chuck Schumer had said “good progress” had been made on addressing the debt ceiling, “and I am optimistic that we will be able to prevent the awful prospect of the US defaulting on its sovereign debt for the first time ever.”

“Nobody wants to see the U.S. default on its debts. As Secretary Yellen has warned, a default could ‘eviscerate’ everything we’ve done to recover from the COVID crisis,” Schumer said on the Senate floor. “We don’t want to see that, I don’t believe we will see that.”

McConnell did not discuss the matter Tuesday morning while speaking on the floor. But Monday night, he said at a a Wall Street Journal CEO Council Summit, “I can assure you the country will never default.”

The Treasury Department has warned that the government could hit the debt limit and have difficulty meeting its obligations after Dec. 15, though outside analysts have said the government has a bit more time.