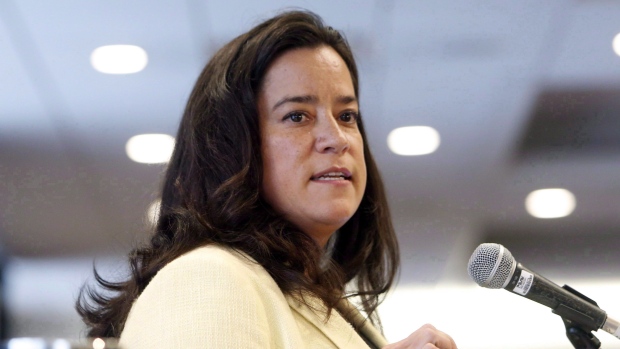 OTTAWA -- The Conservatives are asking the federal judicial affairs commissioner to investigate the leak of confidential information about former justice minister Jody Wilson-Raybould's controversial choice for chief justice of the Supreme Court of Canada.

Conservative justice critic Lisa Raitt has sent a letter to Marc Giroux arguing that the leak "strongly suggests" that "political actors" leaked information about an appointment to the country's highest court.

If so, Raitt says, it would be "an egregious case of political interference ... that severely injures the independence of the judiciary."

Raitt's letter comes two days after The Canadian Press and CTV reported that Wilson-Raybould and Prime Minister Justin Trudeau clashed over whom to appoint to the top court upon the retirement of Beverley McLachlin as chief justice in 2017.

Sources, who spoke on condition of anonymity in order to discuss details of the normally confidential process, said Wilson-Raybould urged Trudeau to name Glenn Joyal, chief justice of Manitoba's Court of Queen's Bench, to fill both McLachlin's spot on the bench as a justice from western Canada but also the chief justice role.

They said Trudeau was disturbed to discover that Joyal took a restrictive view of the Charter of Rights and Freedoms and had criticized the top court for liberally interpreting it to include "new rights" not explicitly mentioned in the charter; the court's broad interpretation has led to things like legalization of same-sex marriage and the striking down of Canada's abortion law and prohibition on medically assisted dying.

Wilson-Raybould said Monday there was "no conflict" with Trudeau on the matter but otherwise declined to comment, saying the selection process for Supreme Court justices is confidential and any disclosure "could compromise the integrity of the appointments process and potentially sitting justices."

However, on Wednesday, citing an anonymous source, the Globe and Mail reported that Wilson-Raybould recommended Joyal as part of a broader plan to appoint an Indigenous judge to the role of chief justice of Manitoba's Court of Queen's Bench -- which would have been a first for a superior court in Canada. The newspaper also said Wilson-Raybould believed Joyal held a more liberal view on the charter of rights than Wagner, although the report cited evidence to the contrary.

The leaks suggest Trudeau may have had reasons unrelated to the SNC-Lavalin affair to move Wilson-Raybould out of the prestigious justice portfolio in a mid-January cabinet shuffle. She was moved to Veterans Affairs but resigned from cabinet a month later amid allegations that she had been improperly pressured last fall by the Prime Minister's Office to intervene to stop a criminal prosecution of the Montreal engineering giant.

Wilson-Raybould has since said she believes the move was punishment for her refusal to instruct the director of public prosecutions to negotiate a remediation agreement with SNC-Lavalin. Such an agreement would have forced the company to pay stiff restitution but saved it from the risk of a criminal conviction, which could threaten the viability of the company.

Raitt said Wednesday that the leaks about the Supreme Court appointment process are more proof of Trudeau's disrespect for the rule of law.

"The SNC-Lavalin affair has raised serious questions about the rule of law in Canada and the degree to which the Prime Minister's Office has interfered in it," she said.

"This most recent episode of potential political interference from the PMO only further damages our democratic institutions and values and requires immediate attention."